Who the hell does Ballmer think he is? Apple? 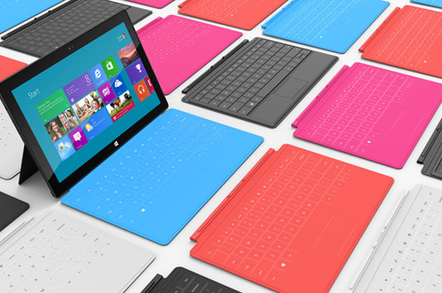 Microsoft has scored two own goals by getting into the hardware game with Surface, the software giant's design for a laptop that thinks it's a tablet: long-standing PC manufacturers are alienated, and there is growing disquiet in the channel over Redmond's decision to sell the lap slab direct.

The Pegatron-built Surface slate will hit the streets at the same time as Microsoft's Windows 8 operating system on 24 October, but it has already caused some controversy.

Taiwanese firm Acer has again urged Microsoft to rethink its strategy with Surface, which is likely to cause conflict between the software giant and its hardware-assembling friends.

"We have said [to Microsoft] to think it over," said Acer chairman and CEO JT Wang, according to reports in the Financial Times.

"Think twice. It will create a huge negative impact for the ecosystem and other brands may take a negative reaction. It is not something you are good at, so please think twice," he added.

Some months ago Acer's EMEA chief Oliver Ahrens told The Channel he hoped Microsoft's latest foray into tablet computing does not "defocus" Redmond from improving its core software products. Ahrens said Microsoft was in a "complex situation" as a software supplier that now has its own hardware.

And he reckoned Surface sales will not set the world alight due to the expected high price tag.

Let's face it, Acer and all the other vendors playing catch-up in the fondleslab sector don't want another player in town competing for the affections of punters.

For its part Microsoft has acknowledged, albeit in the latest SEC filing, that its device will "compete" with PC manufacturers' gear and this "may affect their commitment to our platform".

Microsoft CEO Steve Ballmer took the stage at last month's Worldwide Partner Conference to claim that thousands of computers builders that shift its software with their hardware are still very dear to the Windows giant.

He said Surface is a "design point" and claimed "we may sell a few million, I don't know how many", but added it was a drop in the ocean compared to the total number of Microsoft-powered devices shipped. Yet he still risked upsetting his global army of resellers - the feet on the street that seal deals and spread Microsoft gospel in return for cold hard cash.

'Not what I'd call a typical distribution chain'

Ballmer last month told US trade rag CRN that channel folk will be able to sell Surface but only if they order it from a Microsoft store or Microsoft.com. There will be no formal channel programme, for the interim at least.

Setting up a distribution network (the traditional way of channelling machines from factories to warehouses, shops and desks) may come later as Ballmer has left that option open. However, Microsoft probably wants to see how Surface ships first and test the appetite for its lap slab.

Resellers have already started to rebel against Microsoft, albeit from the sidelines.

"There are no retail stores outside of North America," said one channel source. "So how long before Microsoft realises that it needs to take the products out to a wider sales community?"

Apple has invested in its service and support channels, but these are less prominent in Microsoft's model. Getting help after a hardware prang or technical problem with a Surface slate may prove tricky for punters.

And then there is the more complex world of business customers. Corporate resellers say biz bosses are showing an interest in Windows 8-based devices and turning away from Apple's iPad.

"Microsoft won't be able to provide integration services into corporates through the Microsoft store," said a channel insider, referring to the software giant's online shop for small biz, developers and ordinary punters. "iPad sales have tailed off in that market which leads me to believe customers are keen to evaluate Surface."

The consumerisation of tech, and the advent of bring-your-own-device, means that Microsoft will likely target the business space on top of touting to consumers. But some of Microsoft's channel partners are predicting that by the end of calendar Q1 2013 Microsoft will have dropped its bravado and unit prices to bring partners on board.

According to Canalys analyst Tim Coulling, the distribution channels will be too limited for Microsoft to be really successful: it "needs to branch out" and flog its kit in new ways, we're told. "But how will the OEMs [original equipment manufacturers] react if Microsoft gives Surface wider distribution?" he asked.

Rumours in the market suggest Microsoft will charge PC builders up to $90 to install Windows 8 onto their devices, but as Canalys pointed out this may price manufacturers out of the market.

"OEMs have got to get below the price of an iPad because it's seen as the premium product. It could be important for them to compete," said Coulling.

The official price of the two Surface models - the ARM-powered Windows RT and the higher-spec x86 PC version - have yet to be confirmed by Microsoft, and this will determine customer adoption and the blood pressure of angry manufacturers and channel partners. ®