How do you measure up at the Olympics?

In Rome in 1960, a very strange thing happened in the men’s 100m freestyle Olympic swimming final: the man who recorded the fastest time was given the silver medal.

In the absence of touch pads to record a swimmer’s finishing time, the method of determining the winner was complex in the extreme. Firstly, there were finishing judges, three of whom were assigned to either first, second or third. Their job was to record who they thought had come in their position. In addition, each lane was assigned three timers, all using stopwatches to time the swimmer in that lane. But these timers were only to be referred to in the event of a tie.

The race was very close, with Australia’s John Devitt and America’s Lance Larson heading towards the end of the pool with nothing between them. The lane judges timing Larson recorded his time as 55.0, 55.1 and 55.1. The judges timing Devitt all clocked him at 55.2.

Two of the finishing judges for first place recorded Devitt as the first placed swimmer. The third found that Larson had won. Of the three second place judges, the position was reversed, with two recording Devitt as finishing second, and only one recording Larson as the silver medallist.

Instead of referring to the timings, the head judge overruled the tie, and declared Devitt the winner. He took Gold, while Silver was awarded to Larson. Subsequent appeals from Larson’s camp were unsuccessful.

Unsurprisingly, touch pads were brought in as quickly as they could be developed, making their Olympic debut in 1968. 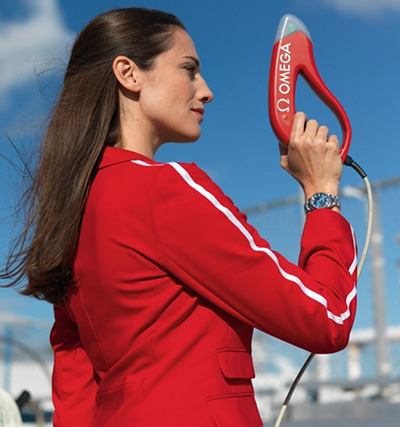 The latest phaser-esque starting gun simultaneously
makes a sound in a speaker behind each athlete.

With the technology available to us today, can you imagine what would happen if the starting pistol had failed to start the clock for a race – or that the clocks were somehow faulty and failed to record an accurate time? Making sure this kind of thing couldn’t happen today is in the hands of watch company Omega, which has been responsible for timing events at the Olympics since 1932.

How long has this been going on?

But it isn’t just the timing that matters: what would the repercussions be if it transpired that the 100m had in fact been the 99.5m? Can you imagine what would happen if, for some unimaginable reason, all the measuring tapes used for field events were found to be five per cent out? It could make all that fuss over the 1988 men’s 100m final seem rather tame.

Someone has to make sure none of this happens: and arrange things so that we can be sure that the races run this summer will be directly comparable to the races run in Beijing; that the swimming pool in London is exactly the same length as the pools in LA, Barcelona and Seoul; and that when the clock reads 9.572s, it is entirely correct, and is using the same kinds of seconds as the all the other clocks that have gone before it.

Enter Imre Mátraházi, technical manager at the IAAF competitions department. It is his department that ensures that distances are accurately measured, and that the 100m really is what it claims to be.

He explains that the general rule for races is that the distance as measured from the start line must not be shorter than the stated length of the race – there is simply no margin for error in this. There is a little more give in the other direction, but not much. A course can be slightly longer that its stated distance, but only by one ten-thousandth of the total distance of the race. So in the 100m, you can be sure that the track is no longer than 100.01m, and for a marathon that the course is no more than 4.2 metres longer than it should be.

This kind of serious approach to distances should especially please marathon runners. The race distance was originally set at 40,000 metres (24.85 miles). The extra kilometres tacked on the end to take the marathon up to the modern distance of 26 miles and 385 yards (42.195km) can be attributed to Queen Alexandra, who during the London Games of 1908 declared that it would be rather nice if the finish line were to be under her balcony, and could it please start from the lawn at Windsor Castle, so that the princesses could see? After all that extra running, even an additional 4.2 metres might be too much to bear. (Runners are said to mutter something like “God save the queen” as they pass the 25 mile mark.*)

As these instruments have to be calibrated every year, a certificate of less than one year old is required. Off the shelf Electronics Distance Measurement (EDM) devices are supplied to an industry maximum standard deviation of ± 3mm.

“Calibrated steel measuring tapes and steel bars are also used for measuring distances (where no scientific device is used) and the height of the [high jump] bar. For the Pole Vault, it is customary, in major competitions, to check the height by EDM as well,” he said.

So we can be sure that the distances are right. After all, the people who check this sort of thing are not the sort of people who approximate. There is no “about half a mile” here. Similarly, timings are looked after by people who would never arrange to be somewhere in “about half an hour”. This is serious stuff.

Next page: Timing is everything
Page:
Tips and corrections
31 Comments