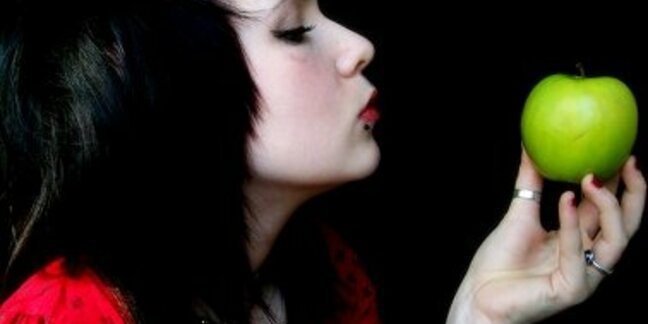 Apple released its earnings report for the third quarter of its 2012 fiscal year, and its numbers came in well below most Wall Street moneymen's projections – largely, it seems, on a steep quarter-to-quarter drop in iPhone sales.

Shares in after-hours trading took an immediate hit, down from just over $600 per share before the release to below $570 right after.

"We're thrilled with record sales of 17 million iPads in the June quarter," said Apple CEO Tim Cook in a statement accompanying the earnings release, focusing on one of the quarter's bright spots.

With all the hoopla about the iPhone 5 and its pent-up demand, many observers were prepared to see iPhone sales take a bit of a dive while users waited for the next-generation iPhone to appear, likely later this year – and that's exactly what happened, if you remove "a bit" from that sentence.

Apple sold 26 million iPhones in the quarter, down from a hair over 35 million in the last quarter and a dash over 37 million in the holiday quarter before that. 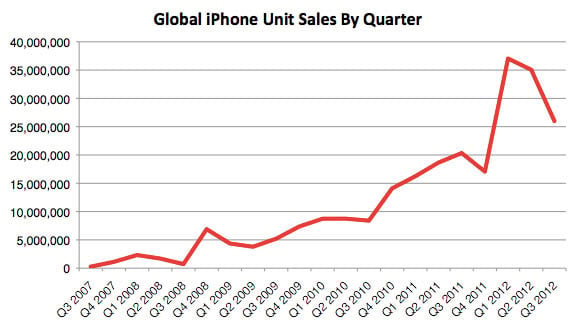 The iPhone 5 can't come fast enough for Cupertino, it seems

The Cupertino consumer-electronics maker – oh yes, and computer maker – posted quarterly revenue of $35bn and quarterly net profit of $8.8bn, resulting in earnings per share (EPS) of $9.32. When compared with the same quarter last year, the numbers look good: for the third fiscal quarter of 2011, Apple's revenue was $28.6bn, net profit was $7.3 billion, resulting in EPS of $7.7.

Wall Street was hoping for more. Yahoo! Finance, for example, surveyed 42 analysts and came up with a consensus EPS of $10.36, with the low estimate being $9.45 and the high, $12.51. The same number of analysts minus one saw an average overall revenue of $37.18bn.

Over at CNNMoney, veteran Apple-watcher Philip Elmer-DeWitt surveyed 34 institutional analysts and the same number of independents, and found the average of the institutional moneymen's EPS projections to be $10.33, with the more-optimistic independents projecting EPS to come in at a whopping $12.31. Elmer-DeWitt's institutionals had Apple's quarterly revenues to be $37.21bn, while the ever-bullish independents forecast $41.49bn.

One take-away from all this aside from the fact that iPhone sales can, indeed, slide and slide big-time, is that the one essential piece of equipment for an analyst – either institutional or independent – is a dartboard. ®