Door creaks and girl farts: computing in the real world

Something for the weekend, Sir? A few weeks ago I dissed the expensive new Apple MacBook Pro for trading a downgraded component spec in return for a pretty display and solid-state memory. In passing, I gave an example of this downgrade: the lack of a CD drive.

Several readers helpfully commented that they hadn’t used CD media in ages and wouldn’t miss an optical drive from any notebook they might buy today. These readers sounded like they came from serious IT backgrounds and knew what they were talking about.

I, on the other hand, live in the real world.

Let me tell you about this ‘real world’ place. Here, people scribble phone messages on the backs of envelopes rather than storing them in cyberbrains. In the real world, when people discover their mobile phones have flat batteries, they don’t happen to be carrying a spare recharging cable in their bag. In the real world, doors creak and girls fart.

I look forward to a non-flatulent, paperless era of ever-lasting batteries and Star Trek-style doors that slide open with a ‘shoosh’. And yes, clumsy optical media will die off pretty soon too, but it hasn’t yet – not in the real world, anyway.

"Gentlemen, may I present the technology of the Krell. A billion databanks,
and not one f**king USB port among them."
Source: 20th Century Fox Home Entertainment

Surely I can’t be the only person who doesn’t like it when manufacturers take things away from me just because it’s easy for them to do so. Mug a baby for its Spangles and you’ll see what I mean.

With respect to manufacturers taking useful stuff out of mobile devices for the sake of a misguided faith in modernity, I believe the rot began when they first dispensed with infrared in the late 1990s. Believe it or not, I found infrared to be a convenient way of exchanging ad hoc files between notebooks at work, and it was a no-brainer for syncing my Palm and Psion palmtops to my notebook.

Then someone somewhere decided that infrared was old hat and took it away. However, Bluetooth for the masses was still a year or two off, and when it eventually arrived in the real world, it was expensive, shockingly insecure and disappointingly incompatible. In the meantime, I was left juggling serial cables and floppy disks in a creaky, farty office because some fucking Gort had decided that his spaceship didn’t need infrared any more.

To make it worse, readers then took the piss because I’d written in a magazine that the ditching of infrared from mobile devices would mean that I’d never be able to use a palmtop as a TV or hi-fi remote control.

“Ho ho, what a moron,” they tittered at the turn of the century. “Why would anyone want to do something as frivolous as that with a handheld computer?”

As Miss Diamond would put it, #HMD.

By delayed coincidence, the very issue of missing CD drives arose this week in a conversation with an IT manager at a client’s premises. He’d brought in his own, earlier-model MacBook Pro to the office, and inevitably we chatted about the new Retina MacBook and its lack of a CD drive. Agreeing with El Reg readers, he noted that he hadn’t found any use for his CD drive for at least the past year. 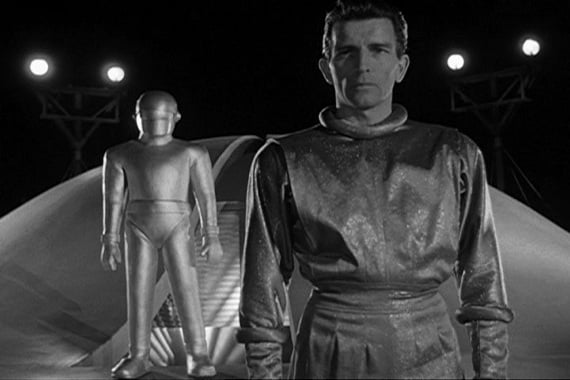 "People of Earth, the time has come to mature as a civilisaton.
You must lay aside your weapons of mass destruction. And your CD drives"
Source: 20th Century Fox Home Entertainment

I was too polite to suggest that this was because he was surrounded by excellent wired and wireless comms in and out of the office, supported 24/7 by his own department. I was even politer by not pointing out that he had plugged his MacBook directly into the Gigabit Ethernet at his desk – something he wouldn’t be able to do with a Retina MacBook because the Gorts at Apple had ditched Ethernet too.

As if on cue, a colleague walked in and announced that she had brought in the files he wanted, and pulled a CD out of her bag. She went to pop it into her PC and was surprised to discover that it didn’t have a CD drive. She leant over to the adjacent desk and found to her increasing embarrassment that this didn’t have one either. A quick search around the office revealed that not a single computer was fitted with any means of reading her CD.

The only machine with a CD drive was the old MacBook that the IT manager had brought in from home. You see, he’d fortuitously carried it into his spaceship from the real world.

Alistair Dabbs is a freelance technology tart, juggling IT journalism, editorial training and digital publishing. He’s not a Luddite or a grumpy old man harking back to th’old days when computers were ignited by rubbing binary sticks together. He just wants kit that works now for real, not in the future virtually.