Shadowman gets the message on integration

Red Hat Summit A bunch of open-source Apache projects relating to application integration and messaging protocols have found what will very likely be their final commercial home, as Red Hat has just bought the FuseSource subsidiary of Progress Software.

FuseSource is a major contributor to a number of different Apache projects and commercializes the tools – much as Red Hat does with its open-source Linux distro and its JBoss middleware. FuseSource has its roots in formerly independent Irish software house Iona Technologies, a spinout of Trinity College, Dublin, which an application integration specialist that became one of the shakers and movers in the services-oriented architecture rage in the 2000s.

Iona developed its own open-source enterprise service bus, or ESB, code, called Celtix, and acquired two other companies – LogicBlaze and C24 – in early 2007.

The Apache software project called CXF is the combination of the Iona Celtix ESB with the XFire ESB created by Codehaus; LogicBlaze had its own open source integration software and provided commercial support for the Apache ActiveMQ, a messaging and integration server, and ServiceMix, a broader package of open source wares that weaves together CXF, ActiveMQ, Camel, Orchestration Director Engine, and Karaf.

In June 2008, Progress Software, which sells integration and query tools, acquired Iona for $162m, and in October 2010, Progress spun out FuseSource, the steward of the hodgepodge of all those Apache projects, as a separate subsidiary. Perhaps to put it on the market and perhaps with the intent of eventually selling it.

"Application integration software is one of the fastest growing segments of the enterprise software market,” said Craig Muzilla, vice president and general manager of middleware at Red Hat, in a statement announcing the deal. "As cloud computing becomes more prevalent, enterprise customers are demanding greater application integration to enable seamless use of cloud computing. With the addition of FuseSource to our middleware portfolio, we will enable customers to experience greater integration capabilities and flexibility. FuseSource’s technologies, expertise, and commitment to open source make them a great fit." 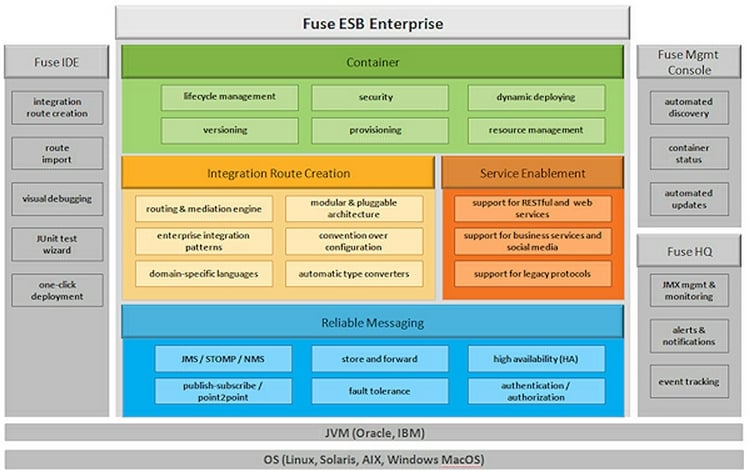 Financial details of the acquisition were not disclosed, but Red Hat did say that it would announce "comprehensive commercialization" of the FuseSource wares later this summer and that the deal would not have a material impact on its financials for fiscal 2013.

Larry Alston, who was previously vice president of marketing and product management at EnterpriseDB, the commercializer of the open source PostgreSQL database, was tapped as FuseSource president when Progress spun it out, said in a blog post that "there could not be a better home for the FuseSource products and services." Red Hat will continue to sell and support the existing products, including support for ServiceMix, ActiveMQ, Camel, and CXF as well as Fuse ESB enterprise (the integration platform) and Fuse MQ Enterprise (which is just the messaging layer). The company also plans to mash up its JBoss middleware with the Camel integration framework and to use Camel to link applications running in private and public clouds.

FuseSource will be integrated into the JBoss unit at Red Hat and there will be a converged product roadmap drawn up in the next 90 days. ®