Springtime for Ballmer and Redmondy 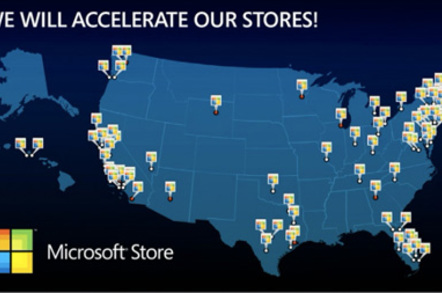 Microsoft is laying the foundations to open up a retail store in the UK with a launch date marked for early next Spring.

The software maker revealed plans to open up 75 stores across the globe at its worldwide partner conference last July and as one of the largest tech markets in Europe, the UK will act as an appropriate beachhead to the continent.

According to a filing at Companies House, Microsoft Retail Store was incorporated on 20 March, the first indication that expansion on this side of the Atlantic may be edging nearer.

Reports by The Verge suggest an online store will arrive in the UK this summer ahead of Microsoft's release of Windows 8 in the autumn as well as before the release of Surface, which is expected out before Christmas.

Loquacious sources also revealed the red ribbon will be cut on a bricks-and-mortar outlet in March 2013.

As revealed by The Channel in October, Microsoft bagged a trademark covering the design for stores flogging computing gear, phones, books, backpacks and novelty items – presumably Steve Ballmer tankards or even Windows Vista.

Trademark registration 4036534 relates to the design of a "retail store with four curved tabletops at the front and rear side walls and a rectangular band displaying changing video images on the wall".

This should prevent anyone copying its designs should they prove successful.

Microsoft is clearly aping the strategy that has served Apple so well but the problem is that it doesn't ooze the same cool factor that forged the fanboi phenomenon.

However, it would seem that just as Microsoft doesn't trust OEMs to get the most out of its Window 8 touch experience on tablets, it is also taking a hands-on approach to retailing.

A mouthpiece at Microsoft said: “We have no new store locations to announce at this time.”  ®