Maude to gov IT suppliers: If you are rubbish you will be binned 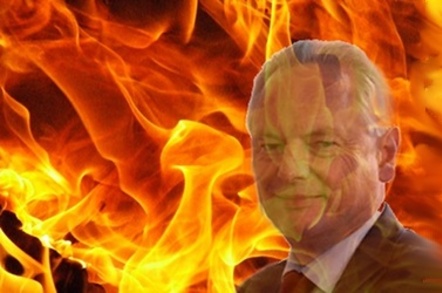 Cabinet Office Minister Francis Maude will today warn some of the largest IT suppliers to government they may find themselves in the metaphorical public sector waste bin if their performance is rubbish.

After the champagne cocktails hair dryer treatment, integrators including Accenture, Atos, Steria, Capita, Capgemini, Logica and vendors HP and IBM will then have a chance to provide feedback to Crown Representatives on UK.gov's attitude to business.

Clearly in self-licking mode, Maude said the Treasury had saved £3.75bn in the year to 31 March 2011 by putting temporary controls on spending in areas such as advertising and marketing, ICT, property and recruitment.

The goal is to top £5bn in the current financial year and the Cabinet Office will seek to make these controls permanent in guidelines (PDF) published today.

Earlier this week, the Cabinet Office estimated it will shave £65m off its annual bill from Microsoft and £3m from SAP, however it spent north of £350m with those companies last fiscal year.

Maude will also reveal to suppliers that the Cabinet Office will monitor their output across the Crown as a whole, with formal information on individual firms used at the start and during the procurement process.

He admitted however that the Cabinet Office has some way to go yet before it can match the buying habits of the private sector.

"I want Whitehall procurement to become as sharp as the best businesses. Today, I will tell companies that we won't tolerate poor performance and that to work with us you will have to offer the best value for money," said Maude.

The Channel reckons the government should tidy up the plethora of large and small public sector buying frameworks that are running in parallel including CITHS, ITH&S and Sprint ii.

These multiple agreements only serve to confuse suppliers, buyers and do not exactly embody the concept of buying IT as a single entity. ®