Scientists have improved the immersive experience of watching telly, with projectors which extend our views into peripheral vision territory.

Researchers at MIT's Media Lab have put together software which extends the image viewed on our tellies onto extra screens in a suitably blurry fashion to mimic what we see in our peripheral vision. 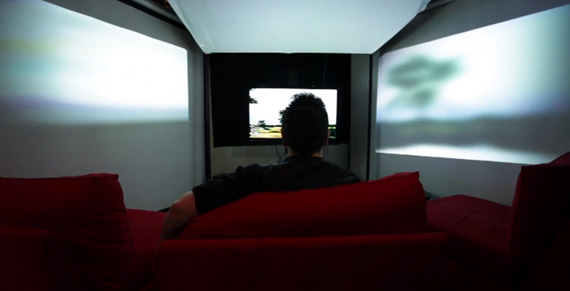 The system, called Infinity-By-Nine, is essentially Ambilight on steroids, with viewers perceiving the extra imagery as a natural extension of the primary content.

The team said tests revealed that viewers believed they were drawn further into the on-screen story, and that the system can be used to induce other sensations, such as the feeling of heat following an on-screen explosion.

As it can run on any consumer-ready hardware, with the right projector setup, any Joe Bloggs can make use of it. And TV content is merely the beginning.

Videogaming, UI design and other areas where a user's vision is concentrated on a central area, have been earmarked for peripheral enhancement too. ®