Have a feel of this healthy pipe, mid-market told 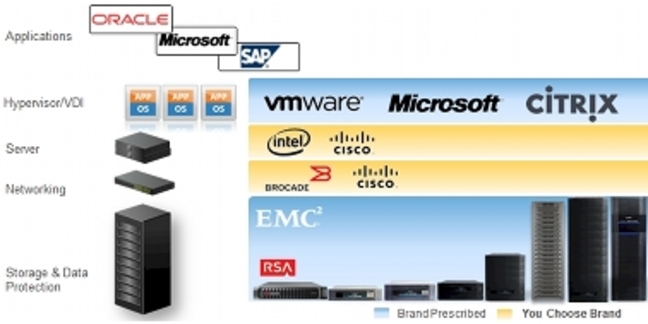 EMC is promoting Magirus as the go-to distributor for VSPEX after it certified 14 configurations that can be assembled at its Euro facility.

Resellers had two options prior to VSPEX: to built their own stack with "no guarantees it will work" or, at the other end of the spectrum, pick up VBlock and FlexPod which are "fixed configurations with fixed support".

Under EMC's converged infrastructure, resellers can integrate any x86 server, while hypervisors from VMware, Citrix and Microsoft have also been qualified, as have SANs from Cisco and Brocade.

"The only feature that is not flexible is EMC storage, because it's an EMC solution," Fossé told The Channel.

EMC is currently qualifying additional tech in its labs that could be integrated into the converged infrastructure, and said another move would be to certify the application layer.

"VSPEX gives users the ability to get a private cloud with minimum risk. Mid-market customers are looking to reduce costs by implementing a virtual infrastrucrture but there is a complexity to doing that," he said.

EMC's other pan-European distributors – Arrow ECS, Avnet TS and Tech Data's Azlan business – do have access to VSPEX. However, Christian Magirus, CEO at the eponymous distie, said his firm had been afforded a "head start".

The CEO said that based on its virtualisation platform, VBundle, his firm "understood how to integrate VSPEX in our go to market model".

Magirus said it is important that resellers can label the VSPEX rack and build their own IP on top, though this must also be checked out by EMC before it is supported.

The distributor holds the component parts used to form VSPEX and the systems are glued together at its data centre assembly facility in Strasbourg. It also provides first-line support post-sale.

This is another example of where services-based distributors are moving into areas that should be the mainstay of solution providers.

One possible sticking point for resellers is that unlike in the case of VCE, there is no single channel programme – so, for instance, integrating HP would not contribute toward an HP sales target.

"This might be difficult to achieve with all the vendors that have ... products [that compete with ours], so first we need to go through the launch phase and will take it from there," Fossé admitted.

Magirus said reseller customers have closed the first deals worth $50,000 and $70,000 and claimed the "pipeline" is healthy.

To sell VSPEX, resellers must be EMC Consolidate or Advanced Consolidate certified: and there are 250 firms across EMEA that have one of these certifications.

To underpin the sales effort, Magirus has devised the Partnering For Profit and Ready to Fly programme, stumping up marketing, close account management, training and tech support. ®