Sixteen-year-old Yasser Lopez will likely have a "miraculous recovery" despite a three-foot spear having been thrust through his head.

"If you had to have a spear go through there [the head], then this spear chose the right path to go with the least damage," neurosurgeon Ross Bullock told ABC News.

The Reg admits to some puzzlement as to how Bullock could suggest any situation in which anyone would need to have had a spear go through their head, but in Lopez's case the intrusion was apparently an accident.

The young Floridian was speargun fishing when a friend, loading his high-powered device, accidentally discharged it into Lopez's face, where it entered his skull an inch above his right eye, traversed the left hemisphere of his brain, and juuust about poked through the back of his head. 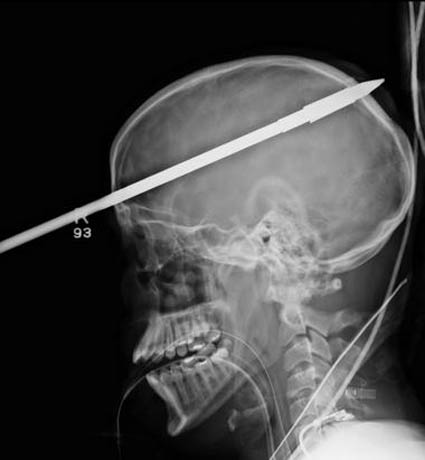 Think you've had a bad day? Not as bad as Yasser Lopez's

"The tip, it didn't penetrate the skin but you could feel underneath the skin on the back of his head so we knew that it went all the way through," said assistant professor of surgery at Miami's Army Trauma Training Center, George Garcia, who treated Lopez.

"The temptation if you don't have experience with these things is, 'Oh well, pull it out'," Bullock told ABC News. "If you do that, most of the time it's uniformly fatal."

Luckily, the paramedics who stabilized Lopez and brought him to Miami's Jackson Memorial Hospital didn't succumb to that temptation.

After using a rebar tool and pliers to stabilize the portion of spear sticking out of Lopez's forehead, then cutting off enough of it with a hydraulic saw so that the unfortunate fisherman could fit into the hospital's CT scan, medics imaged the poor kid's head and discovered that the spear had missed not only all of the important blood vessels in Lopez's brain, but also the bits that control such niceties as his senses, heart rate, and breathing.

"All of these are structures that, if this had happened to affect those, he would not have been likely to have survived to even get to the hospital," Bullock said.

The surgical team also discovered that the spear had a screw-on tip that was slightly larger than the shaft's diameter which would have, as Bullock had suspected, done some nasty damage had the paramedics tried to yank the sucker out of Lopez's noggin.

Instead, Lopez underwent a three-hour operation to remove the spear and is now doing remakably well. "He's making pretty much a miraculous recovery," Bullock said. Although Lopez may have some ongoing problems with movement in the left side of his body, he may very well otherwise make a full recovery.

The mental recovery of Lopez's friend – the guy who watched his spear go through his buddy's skull – remains unknown. ®

Before you kvetch, "IT angle?", ask yourself: as a sysadmin, haven't you ever wanted to fire a spear through a user's brain? 'Nuff said.

NSFW Send nudes plz... for the purposes of training this machine-learning software