Brouhaha over sales chief exit simply not a problem 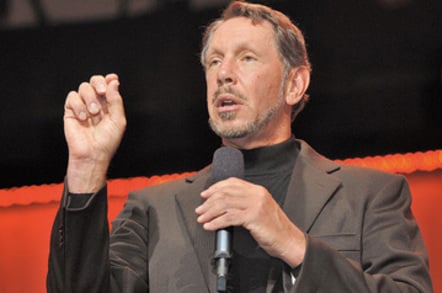 Oracle rushed through the public filing of decent Q4 financials last night some three days earlier than planned to head off any industry talk that the pending exit of a sales bigwig was due to tumbling turnover.

The word on the street, well at least on Murdoch's Wall St rag Barron's, is that 26-year Oracle veteran, exec veep of North America sales Keith Block is to be ejected from the business.

In any case Oracle's numbers were up, and by releasing them prematurely it may have swerved some share price declines. Sales rose 1 per cent to $10.9bn, higher than the $10.8bn consensus by financial analysts.

This was on the back of a 4 per cent spike in licensing to $4bn, and a 5 per cent climb in software licence updates and product support revs to $4.2bn in the quarter.

Once again hardware was the sticking point, as systems sales crashed into an unmovable object – customers' tightly closed wallets – and slid 16 per cent to $977m.

Profits from operations climbed 5 per cent to $4.6bn.

Despite not yet managing to turn around Oracle's systems business, disgraced former HP CEO Mark Hurd, who is now Oracle's president, said the engineered systems biz was turning over a $1bn annualised revenue run rate.

"For the year, Exdata, Exalogic, Exalytics, SPARC SuperCluster and the Big Data appliance grew over 100 per cent year-over-year," Hurd said.

CEO Larry Ellison also pitched in with a heavily optimistic blurb, claiming Oracle's cloud SaaS unit is almost at the same size as its engineered systems.