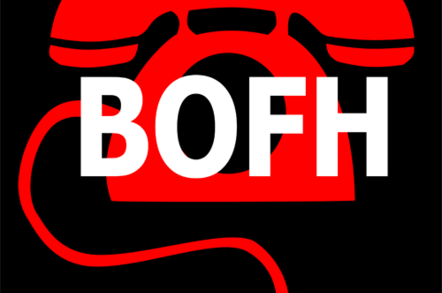 You know what it's like. Some idiot in senior management buys a crap bit of software online - with functionality that's already built into Outlook, but is just slightly different - and it has to be installed right now.

And the moment you double-click on the installer you know you're in trouble when it tells you that it's confirming the version of Netscape Navigator you're running.

The installation fails of course, possibly because you don't know the correct advanced settings to use, but more likely because it wants you to 'upgrade' to the SE edition of Windows 98.

You ring the support line – which you suspect is a pay phone in a minicab office – and they say they'll have to send their expert out – an independent contractor who is the sole support person for this product in the entire UK. And probably drives a minicab part time, because business is so brisk ...

"He's going to have a beard," the PFY says, as we try and guess the expert they'll be sending over.

"And those slacks that have a belt sewn into them with a crest or something on the buckle ..." the PFY adds.

"And ... tan shoes. Drives an immaculately cared-for Ford Granada - Daytona Yellow, if I'm not mistaken - with the protective plastic still on the back seats," I add.

"That's a little precise isn't it?" the PFY says.

"Not really. He's just pushed the call button on the car park intercom," I respond, tapping a picture on my monitor.

"Nice Granada!" the PFY says, almost blowing a circuit breaker on his sarcasm suppression circuits after Gregory introduces himself. GregORY - not Greg.

"Thanks. It's the classic Mark 2 model - the same model they used in The Sweeney. I've had it from new!"

"Of course you have."

Which is why you never engage 'experts' in non-technical conversations ...

"So what do you reckon is going wrong with the install?" I ask.

Which is why you never engage 'experts' in technical conversations ...

Which is why you never say anything that intimates that you might be interested in what 'experts' have to say ...

"I know it sounds like gobbledygook to you, but to technical people it's really quite ground-breaking," he sniffs.

"Uh-huh. So if you could just show me where the problem machine is," GregORY asks, unrolling one of those flexible rubber keyboards that look so cool in the movies but are such a pain in the arse in real life.

"There's already a keyboard on the machine," the PFY says.

"Ah yes, but this one has been ergonomically adjusted to my hand span," he says.

A quick glance at the keyboard concerned shows that it has indeed seen the business end of a heat gun and a stretching loom, or – taking GregORY into account one more time – a hairdryer and the back of an armchair.

While GregORY sets himself and his USB floppy drive up, the PFY foolishly engages him in some idle chit-chat.

"I'm more a Cortina man than the Granada. Lighter frame, which means you can overspec the suspension and shocks, fill the boot and doors with cement and have a vehicle that you never have to worry about in heavy traffic. Sure, you have to be careful going down hills because the brakes are a bit crap, but they're a great ride nonetheless!"

I leave as the various merits of the aged Ford stable are discussed at length, returning to find GregORY waxing lyrical about his browser modifications.

"So you just rename the browser image file & directory and get it to report that it's Netscape?" the PFY asks.

"It's a little more complicated than it sounds," GregORY says, more than a little offended. "It's a lot trickier than changing tapes and looking at CCTV. You could train a monkey to do that."

The PFY stalks off - which is never a good sign.

"I think I offended him," GregORY murmurs with a tinge of remorse.

"Oh, I wouldn't worry about him, he tends to bounce back," I say. "So tell me about these browser mods?"

"Oh right, I see. That sounds very interesting," I mumble. "BUT WAIT, can you identify THIS mystery sound?"

I turn up the volume on my desktop as GregORY listens intently.

"I don't know," he admits. "It sounds a little like rubbish bins banging together."

"Rubbish bins being emptied? I can hear metal, and glass."

"Well, I'm no 'expert', but doesn't it sound a bit like a cement filled Ford Cortina repeatedly backing into a Daytona Yellow Ford Granada?"

"Gosh," I add, flipping the basement car park monitor around. "You could teach a monkey to drive like that!" ®