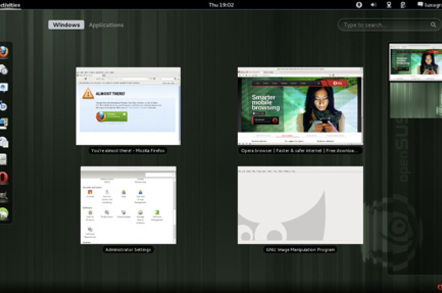 The OpenSUSE community is engaged in an intense debate about the future of the project after the team announced that the 12.2 build won’t be ready for release on July 11 as scheduled.

"Pretty much every milestone of openSUSE 12.2 has been delayed or even canceled," said openSUSE community manager Jos Poortvliet in a blog post. "Compared to the preliminary schedule, milestones 1 to 3 were only about one to two weeks late – but milestone 4 had to be canceled and even Beta 1 was 2 weeks late. Release candidate 1 won’t make it either – to get Factory close to a releasable state we’d need to think about a serious delay."

The stability of the Factory distribution is not up to usual openSUSE standards, he said, and there are problems with the Buildservice development platform going down while churning through backlogs and the integration of features such as GNU Compiler Collection 4.7 and Automake.

With so many code snippets coming in, the Factory build is now broken more often than not, he said, and some developers need to look at the "bigger picture" of integration rather than just sending in poor code. Just throwing developers at the problems wasn't a solution to the problem, and now the entire organization of the project needs a rethink, he said.

The official statement was prompted by an email sent by openSUSE release manager Stephen "Coolo" Kulow that called for a rethink of the current system. Kulow outlined several areas of development that were broken, with Factory never having less than 100 major issues waiting for action and some projects lying fallow for months at a time due to lack of development work.

"It's time we realize delaying milestones is not a solution. Instead, let's use the delay of 12.2 as a reason to challenge our current development model and look at new ways. Rather than continue to delay milestones, let's rethink how we work," he wrote.

He suggested more code-staging projects for Factory and "a no-tolerance strategy about packages breaking other packages." The project should also consider either shifting to longer gaps between version releases, or just issuing them on an "as ready" basis like other open source projects.

The email sparked a huge debate, with the zypper team coming in for some serious criticism and proposals for making greater use of the Tumbleweed rolling release. No time limits have been set on making changes, but the community will face a major shift when they come.

"There's a challenge ahead for openSUSE, an interesting one at that," concluded Poortvliet. "What will we do? The discussion on the Factory mailing list is only now starting and we won’t have a decision any time soon. One thing is certain: the openSUSE 12.2 release won't see the light of day on July 11th but we'll come with something cool for the future!" ®