Dinosaurs on a diet shed tonnes 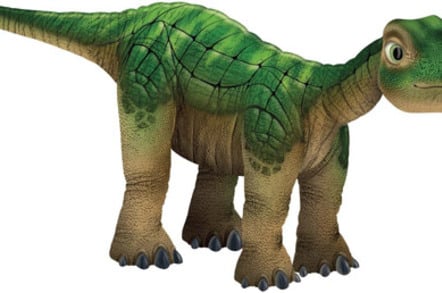 Dinosaurs were probably skinnier and lighter than previously imagined, according to a new paper in Biology Letters.

Minimum convex hull mass estimations of complete mounted skeletons says “Volumetric methods are becoming more common as techniques for estimating the body masses of fossil vertebrates. However, they are often accused of excessive subjective input when estimating the thickness of missing soft tissue.”

The researchers, led by William Sellers of Manchester University, measured just how much skin and flesh extant big beasties like polar bears, giraffes and elephants possess. That investigation, conducted through laser scanning, learned that they are 21% larger than would be the case if they were literally skin and bone.

That result was then applied to a brachiosaurus skeleton in a Berlin museum, with a resulting weight estimate of 23,200 kilograms. That's far lighter than previous guesses of the colossal creatures' weight that have seen it assumed to weigh up to 79,000 kilos.

Sellers says his new method of estimating dino weights is far better than previous efforts which he asserts were guestimations based on artists' impressions of how dinosaurs looked. He also points out that dinosaurs have been losing weight for years and that the new method the paper describes therefore continues a trend of downsizing sauropod weight estimates. ®