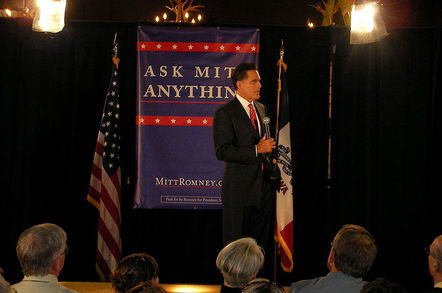 An anonymous tipster claims to have accessed Romney's accounts by answering the security question needed to gain access. Using publically available information the attacker claims to have correctly guessed the name of Romney's pet in order to scan his Hotmail account, and then found the same password was used on for the candidate's Dropbox login.

"I have nothing to do with Anonymous and have never done anything like this before," the person told Gawker, although no corroborating screen shots or email were included in the message. Romney's campaign team has said the authorities are investigating.

It's an unfortunate slip for Romney. He takes security very seriously, as shown when he finished his previous job as governor of Massachusetts. Romney's management team purchased 17 hard drives they had been using for $65 apiece and purged the email servers completely, leaving no electronic records intact from 2002 to 2006, although there are 700 to 800 boxes of documentation.

"In leaving office, the governor's staff complied with the law and longtime executive branch practice," Andrea Saul, Romney campaign spokeswoman, told The Boston Globe. "Some employees exercised the option to purchase computer equipment when they left. They did so openly with personal checks."

The attack mimics that used to access Sarah Palin's webmail account in 2008, shortly after she was nominated as the Republican vice-presidential candidate. In that case, David Kernell, then a University of Tennessee student, earned himself a 366 day sojourn in prison for his cracking, although he did provide proof that the former Alaskan governor had been using her private email for state business, leading to the publication of over 24,000 emails she had made.

It appears Romney didn't learn the lessons from that case and has been caught in the same bind. Politician's lives are well-documented and if they've been honest in answering their security questions, then they are at more risk than most. In Romney's case, the pet question is also rather awkward, owing to a now-infamous tale of his pet Irish Setter, Seamus.

In 1983, the Romney family was taking a 12 hour road trip to their vacation home, and because the car was full Seamus was installed on the roof in a dog carrier fitted with a windscreen. Midway through the trip the dog had an attack of diarrhea and Romney hosed him off (and the car) before continuing the trip. Romney's Republican opponents and the usual suspects at PETA, have made much of the incident. ®

Scott, I want you to meet daddy's nemesis

Tax return exposure threat fizzles. Anyone wanna try this on The Donald?

Did Mitt Romney really get 117,000 REAL Twitter followers in ONE DAY?

But beware bait and switch fakery