White AMERICANS will have become MEKON brain-men by 3000AD

Certain Americans' heads are getting larger at a "dramatic" rate, say researchers at the Forensic Anthropology Center at the University of Tennesse, citing a 6.8 per cent increase in skull length in the past 100 years across their sample.

At this rate, the heads of this group of Americans will have doubled in length sometime around 3000 AD. Conversely overall height increases seem to have levelled off. With body height remaining the same, this means that it is likely that some US citizens will resemble The Mekon, famous adversary of 1950s future British space hero Dan Dare, around the turn of the fourth millennium. 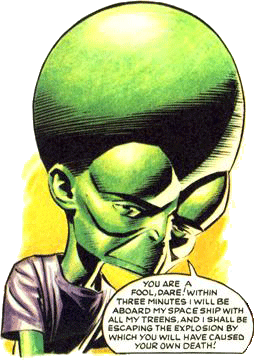 The team of anthropologists led by husband and wife Richard and Lee Jantz measured the skulls of white Americans of European extraction, taking a selection of skulls from the late 1800s to about 1980. The anthropologists said they had measured white Americans because there were more skull samples available across a longer length of time. The same effect may well be taking place in other populations in the States as well.

It's not just the Americans: the heads of Europeans are reportedly enlarging too, though at a slower rate.

The varieties of changes that have swept American life make determining an exact cause an endlessly complicated proposition. It likely results from modified growth patterns because of better nutrition, lower infant and maternal mortality, less physical work, and a breakdown of former ethnic barriers to marriage. Which of these is paramount we do not know.

It's not clear what the extra few peas' worth of space has been filled with. Brains, one might hope. ®

The research was presented to the annual meeting of the American Association of Physical Anthropologists in Portland, and presented on the World Science site.