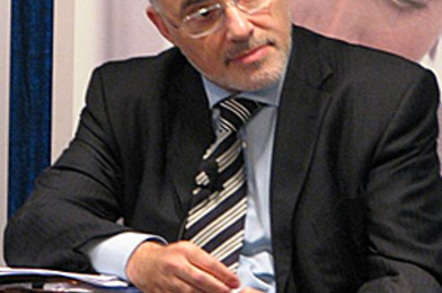 Comment Wild-eyed former HP CEO Leo Apotheker is back in the IT hot seat after bagging a spot on the supervisory board at French tech outfit Steria.

The appointment of the bumbling exec was approved by 99.8 per cent of shareholders at the Annual General Meeting on 15 May. At the same time, Laetitia Puyfaucher was also voted onto the board.

Presumably investors have been locked in some sort of time warp over the past couple of years and missed Apotheker's hapless but brief reign at SAP and then HP.

At SAP he caused a storm during his 10-month tenure as CEO by leading the firm to its first quarterly loss in seven years, and faced a customer backlash after attempting to raise prices during a recession. At HP, he presided over a summer of gaffes, which included putting the future of HP's PC arm in doubt in August and canning the webOS hardware wing.

In the same month he also splashed $10bn on UK software maker Autonomy.

When Apotheker joined HP, its market cap was $77bn, but it fell to $45bn last year, and investors lost confidence in the vendor. Apotheker pocketed a severance payment of $7.2m when he left HP in September.

Steria claimed without a hint of irony today that "Leo Apotheker is known throughout the IT services industry for his experience and knowledge".

He also sits on the board of Schneider Electric and NGO PlaNet Finance. François Enaud, Steria Group general manager, said: "Given the widespread changes underway in our industry, Leo's expertise in strategic planning and Laetitia's in image development will be precious assets for our group."