Nokia has once again been inspired Gotham City, bringing its limited edition Batman casing to the Lumia 900 in time for this summer's blockbuster, The Dark Knight Rises.

The Lumia 900 follows its smaller sibling, the 800, in being recast as a Batman model, which comes in a matte black design with the famous caped crusader logo encrusted on the rear. The software has also been 'spruce-Wayned'-up with Batman-related wallpapers and stuff. 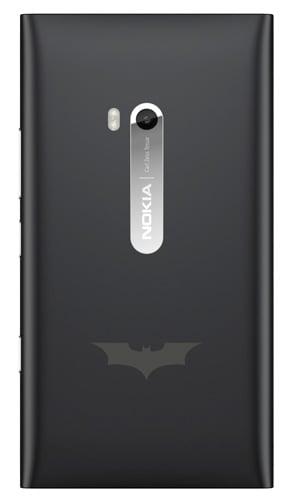 Unlike the Lumia 800 version, though, there should be more than 40 units available, as Phones4U has been heavily touting its exclusive rights to offer the Batman blower in the UK.

You can read our full views on the Lumia 900 here on Reg Hardware. Of course, there was no badass symbol on the back of that case to influence our opinions.

The Nokia Lumia 900 Dark Knight Rises edition is up for preorder at Phones4U either Sim-free for a smidgin short of £600 or free on contracts from £31 per month.

Anyone who reaches into their pockets for the Lumia 900 on Phones4U will also be up with a chance of winning VIP tickets to the film's premiere. Holy smokes. ®