GeForce Grid could disrupt everything

HPC blog With the introduction of VGX and the announcement of Nvidia's GeForce Grid offering, Nvidia and their partners are taking square aim at one of the biggest market opportunities around: gaming. Video games are big business.

For example, Call of Duty: Modern Warfare 3 totted up more than a billion in sales after only 16 days on the market in late 2011. Hollywood movies, for all of 2011, only pulled in $10.5bn in ticket sales. The Call of Duty franchise has harvested more than $6bn in sales since it was introduced in 2003. In comparison, the somewhat successful Star Wars films have earned around $8.3bn in ticket sales after being adjusted for inflation.

But Call of Duty is only part of the picture. According to VGChartz, which seems to have a decent handle on these things, more than 430 million games were sold in 2011 for the top three consoles. If we use an average - and conservative - price point of $35 per game, that’s at least $15bn in revenue for retail game sales. This isn’t counting any additional earnings from PC versions, online accounts or add-ons. This handily beats the $10.6bn that Hollywood snagged in 2011.

Console sales are also considerable. VGChartz estimates PS3, Xbox, 3DS, and Wii console sales at a combined 53 million units in 2011. If we peg a conservative $200 figure on each console, that’s a total of $13.25bn in hardware revenue - not including overpriced accessories and batteries. The bottom line is that the home gaming segment is at least a $28bn opportunity – but probably significantly higher. High enough to attract a lot of attention and investment, for sure.

Enter Nvidia with its GeForce Grid offering. It’s aimed to give service providers the ability to stream the most complex and challenging games with latencies that are comparable to or better than home game consoles. Latency is the key – high latency kills the gaming experience. 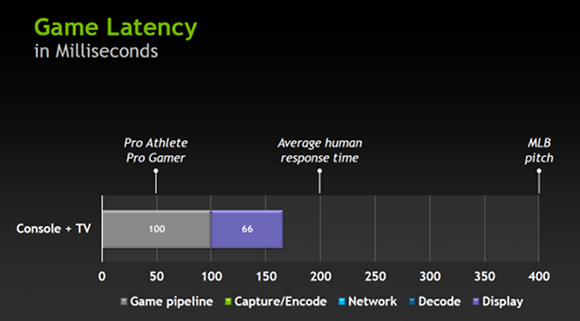 Committed PC gamers go to great lengths to reduce latency and maximise frame rates, because it gives them faster reaction times and thus a competitive advantage. These are the guys who are buying uber high-end video cards, using liquid to cool their heaty stuff, and overclocking it well past warranty support – all in the quest to be the baddest ass on the net.

How much latency is too much? According to this chart, pro gamers react much faster than we average humans. Okay, I’m a little to the left of ‘Average human response time’. My personal latency is measured in not milliseconds but in real seconds and even minutes, depending on the situation. The chart shows us why professional gamers aren’t the target market for Xbox, PS3 and other console game boxes. These guys are PC gamers through and through. 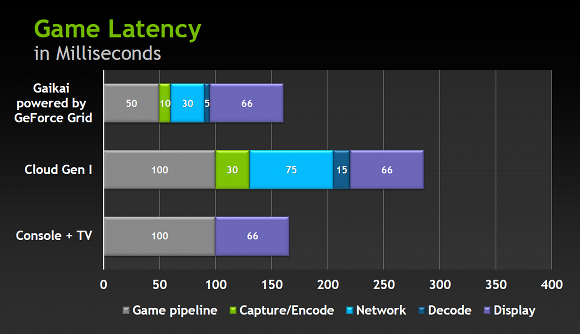 According to Nvidia and Gaikai, the new GeForce Grid will deliver latency that equals what you can get from today’s console and TV experience. And this isn’t for simple online games; they’re talking about rich, complex games, the ones that typically pose the biggest challenge for clouding up.

The biggest improvement comes in the game pipeline (gray box) processing category, which is understandable and intuitive to me. Consoles have reasonably performant hardware when they’re first released, but the hardware is updated much less frequently. On the same game, a decently configured PC will run rings around a console.

So it stands to reason that high performance data center gear would easily be twice as fast on compute tasks as a console – if not faster.

I’m not sure what “Cloud Gen 1” is in terms of hardware, architecture, games, etc... but being almost double the latency of a locally connected game console means it’s probably a relatively crappy gaming experience. But it might not be craptastic for everyone; folks with a fast PC and good connection might be very happy with it – particularly if they’re able to beat flailing newbies with impunity just by virtue of their hardware speed.

The demo at GTC 2012 was convincing - like all demos are supposed to be. There were two players jamming away on the upcoming Hawken shooter game. The game was hosted out on the net, and the players were using very simple clients, an iPad in one case. Movement was smooth and natural, with no noticeable lag. Was it fast enough to satisfy a professional or highly dedicated amateur gamer? I can’t say for sure, but I’m not sure that really matters.

If the GeForce Grid is even close to the console/TV experience in terms of playability and performance, it could be a big win for all involved. Potentially, it could disrupt the entire gaming segment and transform some big winners into losers and vice versa.

From the perspective of the service providers - meaning the guys who own a lot of servers, switches, and cables - this could be a rich new business. Many of these providers, like cable giant Comcast, aren’t in this business at all. They provide broadband services, have massive racks of servers, already provide streaming video, and already have a billing relationship with tens of millions of customers – so they’re well positioned to move horizontally into gaming. Assumedly, they’ve held back because they can’t make the business case pencil out.

GeForce Grid might be the new factor that makes their pencils move in the right direction. Nvidia says that two Kepler GPUs packaged together can serve up to eight simultaneous game sessions. Power consumption per game session with GeForce Grid is about half of what today’s game streamers consume. If the performance specifications are accurate and the acquisition price is reasonable, we could see the biggest broadband suppliers become the biggest game streamers.

Next page: What does this mean for devs, gamers and gaming houses?
Page:
Tips and corrections
38 Comments