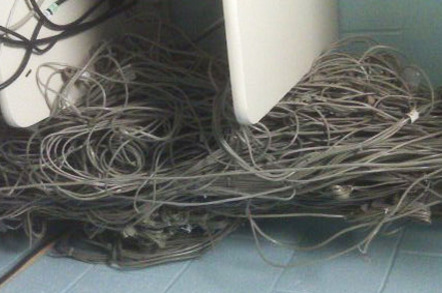 Comms services provider Kcom jacked up profits for its full year despite a slip in revenues, preliminary results released this morning show.

The erstwhile local telco said this didn't distract from its ongoing refocusing, and it still intended to up its dividend this year.

The firm, as is the fashion these days, said that earnings before interest, tax and depreciation, were £77.9m, just 2.5 per cent up on the year.

Shareholders will get a dividend of 4 pence per share for the full year, and the firm reckons business is progressing well enough to forecast a ten per cent increase in the dividend this year.

The Kcom segment, which covers its national business comms activities, turned in revenues of £289.3m, down 2.7 per cent, and EBITDA of £31m, compared to £32m a year ago. It said that it saw "some early growth" in its strategic focus areas, while this was offset by a decline in lower margin premium rate services and other non-core activities.

It highlighted a number of specific initiatives during the year, including building up a trio of public sector network initiatives, and securing new relationships with customers including Asda, the Health Lottery, Molson Coors and WorldPay.

It also said it would be launching a Kcom Workplaces proposition, which will be launched in the second half of this year, and will deploy Cisco-hosted collaboration services. ®

Flooded York exchange proved to be a major weak spot