Make the traffic control the lights, instead of the other way around 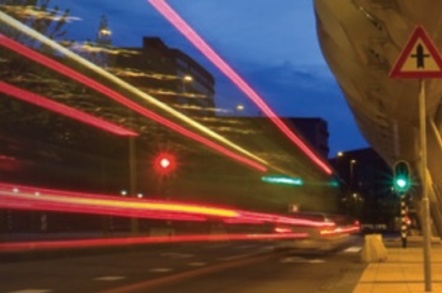 A Swiss traffic management and transport economics expert believes a combination of queue management and computing can help solve the gridlock that plagues the modern city.

Today’s designs over-generalize: traffic lights are phased for typical behavior for a particular time of day (and day of week), and cope badly with anything unexpected. As a result, traffic lights have no response to an accident at an intersection; the previous set of lights will continue allowing traffic into an already-congested section of road, and eventually, the congestion feeds back into the rest of the road network.

Instead of typical queues, Dr Helbing says, the system is suddenly asked to cope with “extremely varied” queues.

Using sensors to measure variables like the amount of traffic already in a road section, how quickly it is moving, and how long to the next change of lights, Dr Helbing’s approach is designed to respond to unexpected events.

For example, the system would detect that traffic on one section of road is slowing down or has stopped, and divert it to alternate routes to prevent the backfill causing gridlock.

Dr Helbing told Tages Anzeiger that the mathematical modeling needed to represent such complex systems was “my most difficult trial”.

While lobbying Zurich to trial the system, Dr Helbing says the city of Dresden in Germany has already taken the plunge, and is about to launch a trial. ®