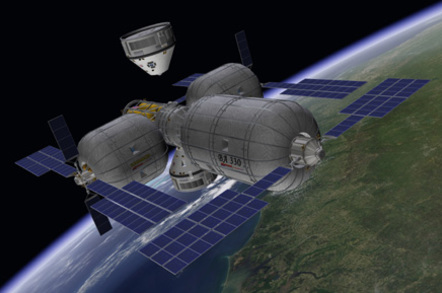 SpaceX has signed a partnership deal with Bigelow Aerospace (BA) to offer a taxi service to and from the inflatable habitats BA intends to put into orbit.

A SpaceX representative told El Reg that it expect to be ready for manned flight by 2015, and commercial services would start shortly afterwards.

Bigelow is partnering with SpaceX to work with its BA 330 module, an inflatable habitat based on NASA technology that can hold around six astronauts in relative comfort. The Nevadan company, set up by Robert Bigelow, founder of the Budget Suite hotel chain, has had two test facilities in orbit for years and now appears ready to move into commercial operation.

"We're very excited to be working with our colleagues at SpaceX to present the unique services that our two companies can offer to international clientele," Bigelow said in a statement. "We're eager to join them overseas to discuss the substantial benefits that BA 330 leasing can offer in combination with SpaceX transportation capabilities." 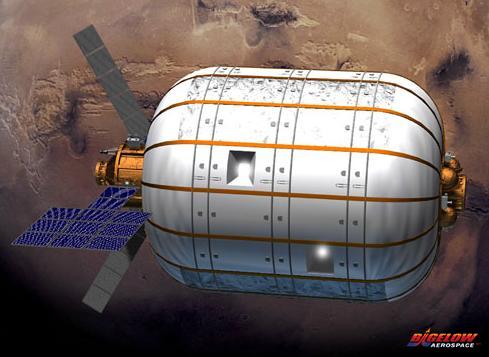 The BA 330 is the latest design from Bigelow, giving 330 cubic metres of habitat when fully inflated. The walls of the shelter are made up of eight layers of materials designed to offer better defense for occupants, and Bigelow claims it offers full radiation protection and better micrometeorite safety than the International Space Station's rigid walls.

Two test rigs, Genesis I and II, were launched by converted Russian ICBMs in 2006 and 2007 and have been in orbit ever since. A third of the size of the BA 330 module, the Genesis II capsule remained airtight and environmentally controlled for two and a half years, five times longer than expected. Both modules are still in orbit.

Despite the origins of the Bigelow fortune, the company is not interested in offering package holidays in space. Instead it wants to link BA 330 modules in orbit and lease out space to businesses and scientists looking to work in microgravity. The two companies are going to focus their sales efforts on Asia at first. 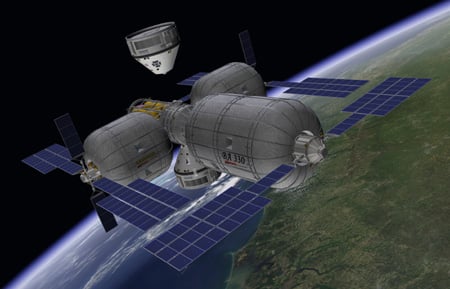 Space for rent for scientists, businesses, or Bond villains

"SpaceX and BA have a lot in common. Both companies were founded to help create a new era in space enterprise," said SpaceX president Gwynne Shotwell. "Together we will provide unique opportunities to entities - whether nations or corporations - wishing to have crewed access to the space environment for extended periods."

It's now up to SpaceX to show it can get its act together on the Dragon capsule. It was due to loft a capsule into orbit last year and dock it with the International Space Station for the first time, but has been delaying the launch. The Dragon is now expected to fly on 19 May.

On Tuesday, NASA signed off on the Dragon capsule's capability to handle commercial passengers, after four days of testing. NASA had to be sure the crew could operate the Dragon craft effectively for docking and emergencies. The test was the seventh of ten certification processes the Dragon capsule must pass before it is cleared for human use. ®