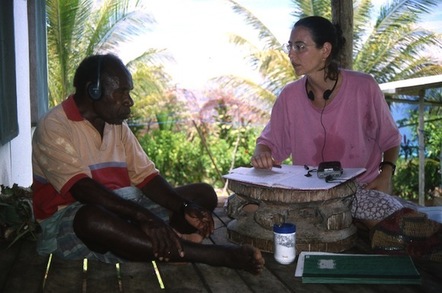 An anthropologist from the University of Virginia is using a hybrid of modern communications platforms to resurrect Arapesh, a defunct language from Papua New Guinea.

University of Virginia linguist Lise Dobrin has used Facebook, Skype and mobile apps to create a digital archive, consisting of transcribed audio recordings and a lexicon that will form a resource and depository for the language.

The Arapesh languages were spoken by some 25,000 villagers living on the coast and in the Torricelli hills of East Sepik Province, but all native speakers have died. According to Arapesh.org, Many Arapesh villagers today "use Papua New Guinea's creole lingua franca, Tok Pisin, as their medium of communication in daily life. In some cases, middle aged adults can understand but not speak the language, and their children have almost no knowledge of their ancestral tongue at all."

For linguistics scholars, Arapesh is of special interest because of its "typologically unusual system of grammatical categorization that makes systematic reference to a noun’s sound, as opposed to its meaning, in order to determine its class and hence what plural marker and agreement forms it will take".

Much of the Arapesh archive comes from research in the late Nineties, when Dobrin recorded conversations in the language using an analog stereo cassette recorder and lavalier microphones.

"Many Papua New Guineans are now global citizens, but they want to learn their ethnicity. When a group of urban Arapesh who use Facebook stumbled upon the Arapesh archive, they contacted Dobrin, saying, in effect, "Can you help us learn our language?," she said.

With limited broadband connectivity for Papua’s population of six million people, the mobile device is the fastest growing platform, with two million users. Following a tech think-tank session with locals, Dobrin is investigating the best ways to make Arapesh, and other endangered languages, readily available online.

The world is home to 5,000-7000 spoken languages, of which more than 2,500 are in danger of extinction, according to a UNEP (United Nations Environment Program) report published in 2001.

+Comment Oi, remember who you picked as our one-and-only engine supplier?