At last: Violin to push out HANA appliance

It's why SAP invested 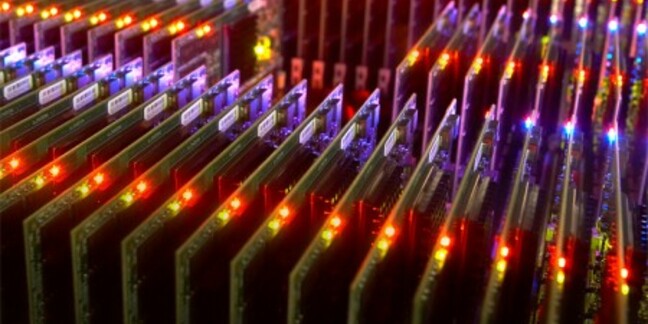 We should be seeing HANA running on a Violin Memory platform, a HANA appliance, probably within 60 days. This is a forthcoming Violin Memory array using TLC flash with embedded servers running SAP's HANA in-memory database.

Conversations with people who understand what's happening in Violin have added additional clarity to our view of the company's plans.

The idea is to get rid of network latency when serving up data from a storage array. With flash memory Violin is also getting rid of disk latency. By using TLC, 3-bit per cell flash, Violin is lowering the cost/GB. TLC flash is very cheap: about 2.25 x the cost of 15K SAS disks per GB.

The box may be called something like a Violin 8000, or some number bigger than 6000, we think, and will likely contain:

Violin already has RAID protection in the 6000 box. The coming system will add: 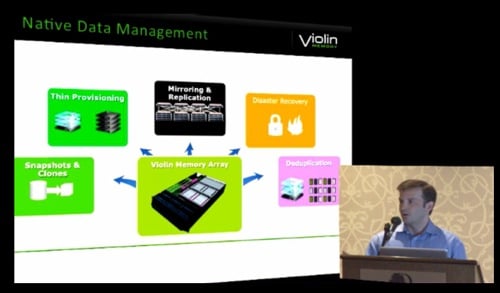 These new features will start being announced "this calendar year", according to Violin Memory's software chief technology officer, Jonathan Goldick. Goldick was talking about the tech at the Solid State Storage Symposium held in San Jose on 25 April. See and hear his video presentation here (check just past the 12-minute point and onwards to find the futures bit). We can expect announcements in the next 30 to 60 days.

Goldick said the aim is to provide the same enterprise-class set of features as those found in a tier 1 enterprise storage array. 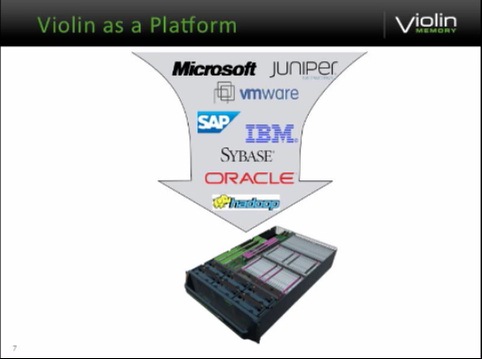 The green items in the box are servers

Software use cases are:

Referring to the platform slide above, Goldick said: "You will see announcements from among these partners of their software running directly inside our box."

It's about having the data and the application in the same place.

By using deduplication, which we are told Violin now has, Violin is lowering the cost/GB and can take it below the cost of fast spinning disk: 15K Fibre Channel drives. Capacity-Optimised flash arrays, like XtremeIO, Pure Storage, GreenBytes, Tintri, and SolidFire offer deduplication ratios of between 3:1 to 5:1. A source said: "We can see that the cost/GB of solid state Capacity-Optimised flash is starting to become less than magnetic media. We are talking now – it has happened."

1) Bandwidth – Higher bandwidth means less time elapsed to send a serial packet from A to B. 8GB/sec has half the transmission latency of 4GB/sec Fibre Channel.
2) Network driver latency – Typically the CPU on the server has to intervene for Ethernet but the HBA offloads the work and has lower latency for FC.
3) Network switch congestion – Packets get buffered and delayed in delivery; iSCSI is more likely to behave like this.
4) Deduplication – Symbol lookups.
5) Media rotational delays (driven by rotational sped of media).
6) Garbage collection cycles.
7) Seek delays on magnetic media.
8) Compression.

Violin is pressing on with its intention of having its memory array plus embedded servers become an application platform and not just be a variant storage array using flash technology.

This is Violin Memory building something like an Oracle Exadata or Exalytics system, but faster – and no doubt cheaper – storage, servers, and software with host network interfaces, all in one box. It is also similar to EMC's idea of running applications using spare X86 engines in its VMAX arrays or X86 processors in its Isilon scale-out filers.

As far as we know EMC has no plans to have applications running in its Project Thunder box. ®