'Our world's biology is reflection of the sky'

A new paper by cosmic ray researcher Henrik Svensmark suggests that the abundance of diversity of biological life on Earth is closely correlated to our planet's proximity to supernovae.

Svensmark, a professor of physics at the Center for Sun-Climate Research at the Danish Space Research Institute, revealed his work in a paper published by the Royal Astronomical Society.

The prof reconstructed the relative rate at which stars within 850 parsecs of our solar system went supernova over the past 510 million years, and compared it to geophysical and paleobiological records.

He concluded, poetically, that: “...remarkable connections to the long-term histories of life and the carbon cycle have shown up unbidden. Biodiversity, CO2 and the carbon-13 (δ13C) isotope (a proxy for photosynthesis) all appear so highly sensitive to supernovae in our galactic neighbourhood that the biosphere seems to contain a reflection of the sky.” 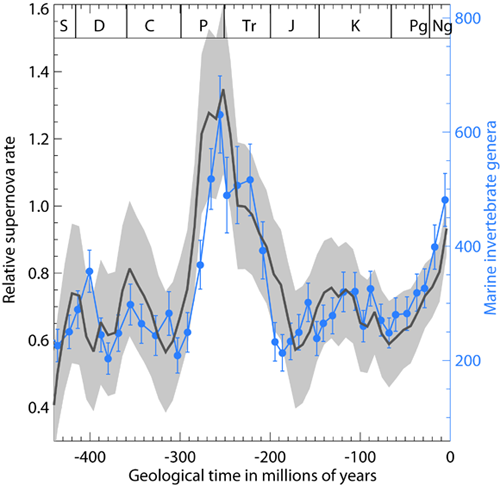 When our solar system passes through one of the galaxy’s rotating arms, it is brought closer to exploding supernovae, which increases the quantity of cosmic rays reaching Earth’s atmosphere. The intense bombardment from a supernova may last around 1,000 years.

Svensmark suggests climate, rather than mutation, accounts for the correlation. He posits that the Permo-Triassic Extinction Event, which saw the mass death of almost all sea life on Earth, was not caused by a comet or asteroid, but rather by a fall in cosmic ray bombardment. Where cosmic ray exposure spiked, there was a corresponding sudden and short-lived falls in sea level and brief glaciations, he asserted.

Earlier work by astronomer Brian Fields had suggested Earth was within a supernova’s “kill radius” – 30 light years – a dozen times over 4.5 billion years.