Skytap, the application development and testing cloud that is funded in part by Amazon founder Jeff Bezos, is tweaking its service once again, adding a new management interface and other features to make it easier for IT departments that use Skytap to give coders a better experience and rein in the budget.

It is commonly believed that the lion's share of Amazon's customers for its EC2 compute cloud and related storage, networking, and load balancing services are doing application development, the Amazon Web Services cloud nonetheless has some customers who are using it to run real-world applications. But AWS, as Skytap has explained to El Reg before, has snapshotting facilities for compute and storage clouds that are too slow. And so just around the time that AWS was getting started in 2006, Bezos hedged his bets and kicked some money into Skytap, which was aimed explicitly at developers and which is trying to give them scalable infrastructure specifically tuned to the test/dev problem.

Skytap got its first dev/test cloud fluffed up in 2008, and it runs the Skytap Cloud in a co-lo data center operated by Savvis outside of Seattle, Washington. System integrator and IT services provider CSC has a white-label version of Skytap that it resells to IT shops under its own brand, which it runs out of its Chicago data center, and Brett Goodwin, vice president of marketing at Skytap, is looking to expand into another location in the near term.

The Skytap Cloud is built on VMware's ESXi and Citrix Systems XenServer hypervisors and runs on a mix of blade servers from Dell, Hewlett-Packard, and IBM as well as various whitebox servers. At the moment, Skytap has nearly 200 customers and has launched over 1 million VMs as they work on code and test it. While the Skytap Cloud was designed expressly for developers, Goodwin says that companies are deploying software demos and virtual training applications on the Skytap Cloud. IBM, Accenture, and Tibco Software all use Skytap to host employee training, for instance. The company's number of virtual machines, bandwidth, storage capacity, and other salient metrics are all growing exponentially, says Goodwin, as it adds new customers and existing customers add new applications to the cloud.

Back in the August release of Skytap Cloud last year, Skytap added self-service cloud orchestration, which allows for n-tier applications to have their tiers installed in the right order so they work. The August release also added hub-and-spoke network configurations, which allows admins to create a center resource like a database or middleware stack and link out through multiple VLANs to virtual machines in the dev and test pools, thus saving a lot of synchronization and replication work. 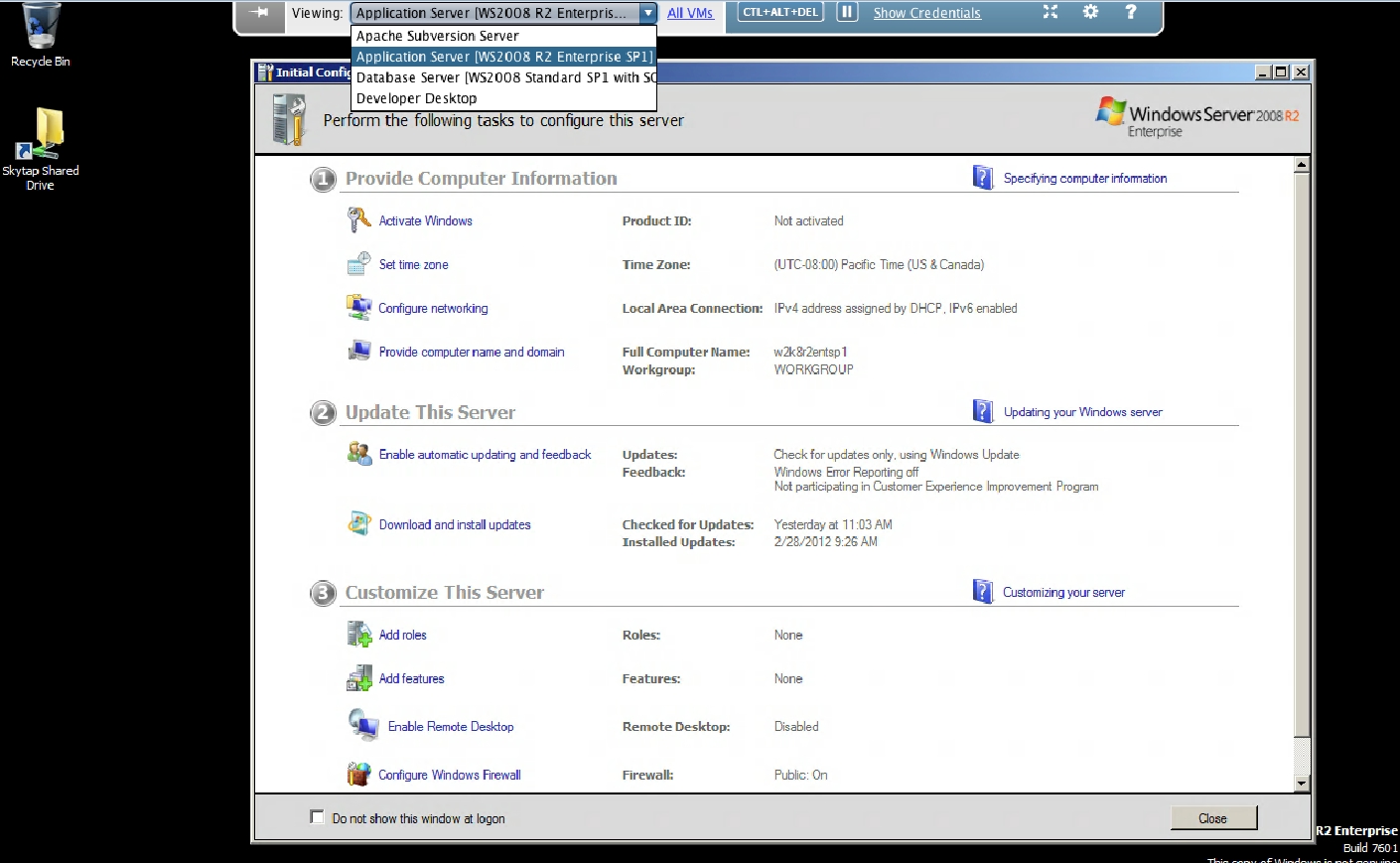 With the April 2012 release of the Skytap Cloud, Skytap has gone back to the drawing board and created a new SmartClient GUI, which is accessible through Internet Explorer, Firefox, or Chrome browsers as well as through an RDP client on iOS and Android tablets and smartphones. The SmartClient interface has a dropdown toolbar that allows for fast switching between VMs and presents VMs in a variety of ways, including lists and thumbnails. The toolbar has a CTRL-ALT-DEL button if you want to restart an OS inside of a VM, and also has a pause and resume button for running VMs. Skytap has tested the SmartClient with hundreds of VMs, and says there is no scalability limits inherent in the tool. The company's largest customers are pushing up against a thousand VMs right now, says Goodwin, and the typical customer has a few hundred.

The SmartClient interface is in beta testing now, and depending on the feedback from testers, it could be rolled into production as the default interface into the SmartCloud in a month or two.

The April release has two other features that go immediately into production. The first is configurable virtual machine bursting limits. Capacity planning is a pain in the neck in either the physical or virtual world, and it is hard to get it just right, particularly as conditions change. So starting with the April release, Skytap administrators can not only set a given compute and storage capacity for a developer or tester, but can also allow coders to have a burstable limit that they can set for temporary capacity needs that the application will automatically have access up to and then also put a ceiling on how high coders can set this burst capacity with a maximum settable limit. These limits cover CPU, memory, and storage capacity.

The Skytap Cloud update now includes customizable reports that dice and slice usage on the cloud by individual, group, or time ranges. The reporting system is aware of capacity quotes set by the administrators and can automatically send a notice, with a usage report, to users or group managers when they are getting close to their weekly, monthly, or annual limits.

Skytap sells capacity on a month-to-month basis with no commitments or on an annual basis, which is obviously a longer-term commitment and therefore comes with lower costs for a given amount of cloud capacity. For $250 a month, you can have five users on the system and you get five virtual machines, each with one virtual CPU and 1GB of virtual main memory. You get 200GB of storage and 500 hours of compute with that $250 fee, and networking bandwidth is included in the price. Typical customers at Skytap are burning $1,000 to $3,000 per month, according to Goodwin. ®