Everyone has a novel in them. Sadly this includes Reg columnist Verity 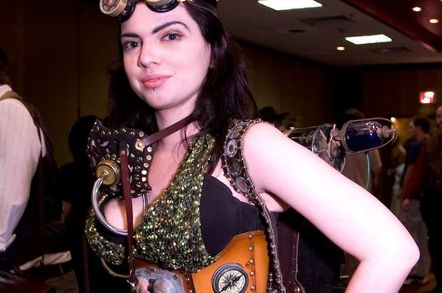 Stob Somewhere on the hard drive of every programmer-wannabe-writer’s laptop there is the first chapter of an unfinished steam punk novel. Here’s mine.

Clockwork iPhones all round

It was late and I was tired, so on the way home I nipped into a Mesco Tetro to pick up a ping meal for dinner.

When it came to paying, the self-service checkout machine insisted that there was an item that it did not expect on its packing platform, when in fact this item was a phantom in the perception of its anti-fraud load cell. So I had to wait on a Mesco Colleague’s pleasure with the PIN and Barcode of Release, which took as long as it always does. I attained a state of reverse Nirvana and frazzlement.

Eventually I grabbed my receipt and carrier bag, and was about to hurry out the way I had come in, when I spotted a small door in the back of the shop that I hadn’t known about before. It had a metal arch over it which I took to be one of those gadgets that sounds an alarm if you should accidentally wander through it with three bottles of gin secreted about your person.

It so happened that I wasn’t indulging in spiritual theft, and the bus stop was on that side of the building. This looked like a Good Shortcut. As I approached, I saw it was defended by a small Private - No Entry sign, but I pressed on, impelled by sloth and righteous bloody-mindedness.

I felt the usual shock of guilty anxiety while passing through the arch, but no alarm sounded, and nobody called out as I hit the bar on the door, and escaped into the night.

Except it wasn’t the same night anymore, Toto.

Of Eloi and Soylent Green

Outside, to my surprise, it smelled smoky, like a day out at the Bluebell railway. As I stepped onto tarmac, a man appeared dressed in one of those long brown coats that used to be the uniform of caretakers and warehouse men but which I haven’t seen for 30 years. He was wielding a clipboard.

He spotted me and approached, a cross writ large on his face like the top of an Easter six-for-the-price-of-four bun.

"So where are they?"

I wondered where were what.

"For starters, where is my palette of Eloi and Soylent Green crisps?"

I made a grunt of puzzlement; the one generally written "Huh?"

A look of scorn appeared on his face. "You’re not a customer are you? Came out through a funny looking arch 'by accident'?"

My face betrayed the truth of this supposition.

"Bill? Bill, come over here will you? Got another Wanderer."

Bill appeared from somewhere behind me. He was a middle-aged man with the same kind of obsolete brown coat as the other, a harassed look and a badge that said William Staple, Mesco Staff, Wanderer Welcoming.

"Please come with me to the office, madam."

I followed him across the yard, through a side door and into a dark office. I looked for a light switch, but to my astonishment the man called Bill produced a metal-clad paraffin lamp of the type that look terrific in BBC costume dramas, but which in real life leak, stink and give out a feeble flickery light the colour of old newspapers.

He produced a box of matches and applied one to the lamp's innards. "Let there be dinge," he said. There was.

We sat down either side of a cluttered desk. I put my carrier on the floor, and said, sarcastically: "I get it. I’ve travelled through time."

Bill picked a pencil out of a souvenir mug, and used it to scratch his side whiskers. "It’s a bit more complicated than that, I’m afraid."

I was still staring at the mug. It bore the slogan "Happy 100th Birthday SS Titanic - England’s oldest line - a century of safe sea-going". Behind it stood a desk fan of rather clumsy appearance. Its base comprised a miniature steam engine complete with boiler, spirit burner and a manufacturer’s label: Mamod Domestic Appliances.

It seemed like a complicated gag, and not very funny. "I’ve travelled to an alternative future, haven’t I?"

He replied, irritably, "You have travelled from an alternative future. This is the real thing. Here, you’d better look at this."

He handed me a printed card. It said:

Welcome, Wanderer, to our universe. We hope you enjoy your visit.

Since you have not travelled in time, there is no need to adjust your chronometer, unless your universe practises the barbaric custom of Daylight Savings.

To minimise culture shock, and to avoid the danger of embarrassment or worse, please note the following facts. In this universe:

If you need to convert money, branches of the National Provincial Bank are prepared to buy your currency at a rate of 19/6 for £1 sterling. Only coinage and proper fivers (the white ones the size of picnic rugs) are accepted.

Please note we drive on the left. Tenez la gauche.