The gut-on-a-chip is about the same size as a USB stick and consists of a central tube that is lined with a single layer of human intestinal epithelial cells to mimic the human body. There's space above and below the cells to simulate the blood flow outside the intestine, allowing scientists to monitor the reaction of chemicals as they pass through the intestinal wall. 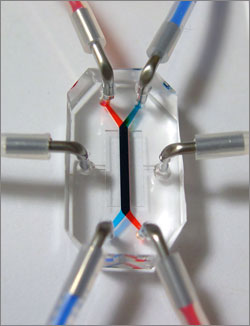 Handy for testing, useless for tripe

A vacuum controller expands and contracts the tunnel in a similar way to the actions performed by intestinal muscles to push the contents of the gut down and out. The team have also managed to culture intestinal flora that occur in humans and add them to the chip, to increase its realism as a testing tool.

"Because the models most often available to us today do not recapitulate human disease, we can't fully understand the mechanisms behind many intestinal disorders, which means that the drugs and therapies we validate in animal models often fail to be effective when tested in humans," said Wyss founding director, Dr. Donald Ingber, in a statement.

"Having better, more accurate in vitro disease models, such as the gut-on-a-chip, can therefore significantly accelerate our ability to develop effective new drugs that will help people who suffer from these disorders."

The Wyss Institute has made something of a specialism of creating miniature human organs. In 2010 the team came up with a similar lung-on-a-chip, and is currently developing a heart-lung micromachine to test drugs for humans. ®

Pic Talk about a motion in the ocean

Don't worry, it was armless

Who, Me? 'I wonder what our users are surfing for… Oh'