Cameron's 'Google Review' sparked by killer quote that never was

No one can source UK bashing that launched law overhaul 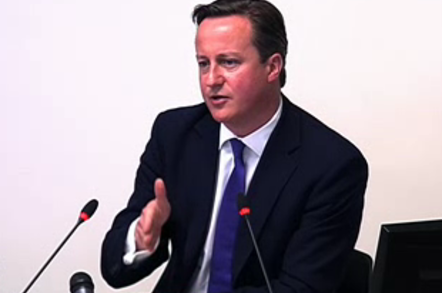 Special report Prime Minister David Cameron launched a sweeping review of UK intellectual property law based on an assertion – that the founders of Google believed they could "never have started their company in Britain" – he can't support, from a source nobody can find. We know this because new information released by No 10 in response to FOIA requests has ruled out private conversations as the possible source.

This is truly a strange story, and it starts in November 2010.

That was when the Prime Minister made a visit to the symbolic Ground Zero of Shoreditch. It was here that he announced his desire to see London's East End become "a world-leading technology city to rival Silicon Valley" and launched the exciting UKTechCity initiative. (See Nathan Barleys to fill Olympic chasm – Cameron for our report, and the No 10 site for PR and the transcript.)

Cameron's justification also raised eyebrows – and this is what is at the heart of the puzzle.

"The founders of Google have said they could never have started their company in Britain," said Cameron. "So I can announce today that we are reviewing our IP laws, to see if we can make them fit for the internet age," promising that "we will change laws where necessary so we break down the barriers to innovation."

Not surprisingly, given the context, the review into IP became known as the "Google Review"; it cemented a close relationship between Cameron and his advisors and the Californian web giant. [See box out below: The Wheatgrass Smoothie and Sandwiches Theory]. There was a small problem, however. Nobody could recall the Google founders Sergey Brin or Larry Page ever saying that UK IP law would have prevented Google starting in Britain. No public pronouncement by the Google founders that referred to the UK's intellectual property laws could be found in the record.

Nevertheless, after the assertion had been given airtime by Cameron, Google's lobbyists repeated the claim at every opportunity. At an RSA debate on the Hargreaves Review, Google's Sarah Hunter said the founders had made it "many times". Yet still nobody could pinpoint one example. Finding a source for the assertion was becoming a little like the search for the Higgs boson. It was all getting very odd. Nobody could say when and where it was said, and the longer the claim remained unsourced, the more it looked like a classic example of carousel propaganda.

So what had inspired No 10 to make this claim?

The Wheatgrass Smoothie and Sandwiches Theory

Perhaps Cameron had got the idea from a private conversation between the Google founders and No 10 itself? That might explain why Cameron's team are convinced of its veracity, even though it isn't in the public record.

After all, the two are terribly close. In 2007, when Cameron was leader of the opposition, Google picked up the bill for the travel costs of his entourage's trip to the US, after which, The Guardian reported that Cameron sounded "a little breathless", like "a lovestruck teenager". The Prime Minister-to-be said Google "should be proud of the amazing things you accomplish every single day" and was "'responsible for a large portion of the wonders of our modern world". Cameron's top policy advisor Steve Hilton is married to Google's global policy lobbyist Rachel Whetstone, a former member of Cameron's "Notting Hill Set" of modernisers. 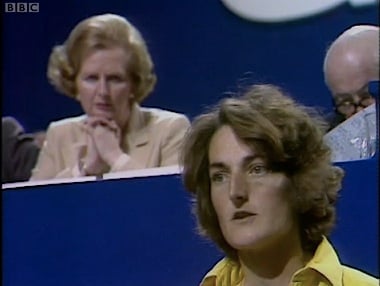 Linda Whetstone lays into the socialists at the 1978 Conservative Party Conference.
Daughter Rachel, at Google, now argues for collectivist solutions and against property rights

So it's no surprise that the IP review has been criticised for offering a "Google-model vision" of the world. But it isn't a vision supported across the political spectrum. "If Google and the ad agencies drain the swamp of piracy by removing their financial incentive - online advertising - then we would have a fertile environment in which paid-for content could flourish," a Labour front-bencher pointed out recently. [See Labour highlights Tories' Google problem].

Ironically, Whetstone's grandfather Anthony Fisher was Britain's leading pro-market advocate, and founded both the Institute for Economic Affairs (1955) and the Adam Smith Institute (1977). Digital markets are what Google is doing its best to prevent, and now Whetstone lobbies ferociously against property rights for digital goods.

It would take an intellectual Houdini to extricate themselves from this tangle of contradictions.

Well, now we have an official response, of sorts – thanks to a Freedom of Information Act request. No 10 declined the FOIA request asking for sourcing of the "we couldn't have started in Britain because of copyright" claim, because it says the information is "publically available". As an example it cites a report in the Guardian newspaper from January 2009. 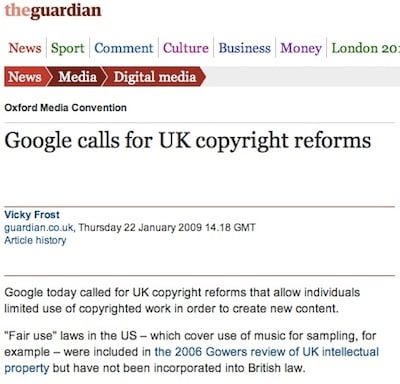 When we turn to the report, we find it is a brief dispatch from the Oxford Media Convention headlined "Google calls for UK copyright reform". In this, we Google's UK public policy manager at the time, Richard Sargeant, saying: "Copyright reform in this context is crucial... We look with respect at the system of fair use rights that exists in the US. Europe doesn't have anything similar, which makes it much more difficult for people to see what they can and can't do." 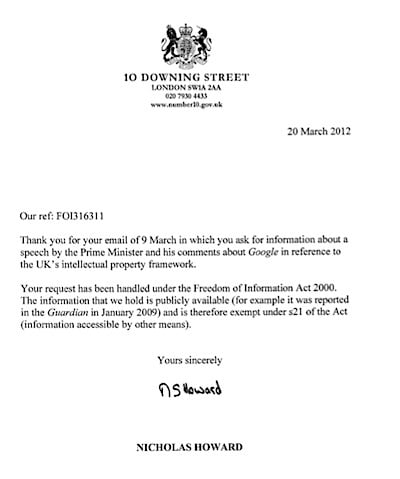 "Evidence base": No.10 says the source is everywhere and nowhere

But wait a moment. You will notice that there's nothing about Brin and Page saying they couldn't have started in the UK. Just like the hunt for the Higgs boson, we're back to square one. And Sargeant himself, in an email to El Reg this year, explicitly denied being the source:

I've never made any such claim either in print or privately. I have no idea what the providence of the claim is, but I wasn't working for Google when the IP review was commissioned, and I've had no contact with Google or No 10 on the matter.

So there we have it. The quote that turned a Prime Minister's head – and inspired an "evidence-based" review – turns out never to have existed in the first place. Or it "exists" in such a peculiar way that nobody can find any evidence for it. This is hardly the stuff of a new era of empirical policy-making.

All of this leaves the Prime Minister looking quite hands-off. Or, if you're less inclined to be charitable, he looks less like the boss, and more like a ventriloquist's dummy for lobbyists and his advisors. ®