And the strange hypocrisy of the BBC's rivals 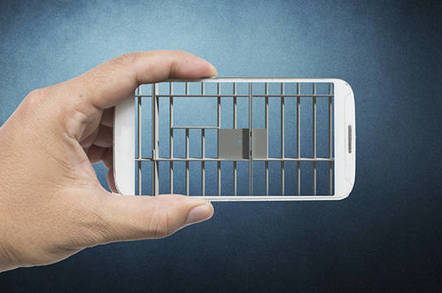 Comment Not one Hollywood studio or record label company has ever incarcerated anyone merely for not paying for media consumption. A few years ago the entertainment industry filed civil suits against individuals, but received so much criticism it stopped. Now they target industrial-scale pirates, or push for milder sanctions such as speed slowdowns and contract termination.

To any reasonable person, prison is a harsh and unjust punishment for the action of not paying for media. This may be antisocial behaviour, but arguably less so than many crimes that receive a small fine or caution. A criminal conviction affects the individual's job prospects and credit rating.

However, there's a unique exception.

3,000 Britons a week, mostly in the lower income brackets, are being given criminal records for refusing to pay big media licensing fees. Figures from the Ministry of Justice show 165,000 have been prosecuted in the past twelve months, with 142,375 convicted and sentenced. This amounts to ten per cent of all court cases heard by magistrates. 74 individuals have even gone to prison for non-payment of the compulsory per-household fee, which sees all funds raised going to just one large media company: the UK broadcaster, the BBC.

Magistrates say they have pushed for a fairer subscription system for twenty years, and wanted it introduced with the switchover to digital TV. But it hasn't happened.

In the internet era, refusing to pay for movies news and music - being a 'paytard' - is advocated by some. But this is minority fringe view; generally as a society we consider not paying for what we use to be unfair. So how unfair is being asked to pay for something you don't use, but somebody better off than you really likes? It's this socially regressive aspect of the fee that poses all kinds of problems.

Upstairs, we watch. Downstairs, you pay

Many of those in court are not even "consuming" BBC media output in any significant amount, if at all. But the traditional ethical arguments against flat (poll) taxes take on a new dimension when you look at the income of those being prosecuted. Much of the output of the BBC is skewed towards the middle classes. It takes on an Upstairs, Downstairs hue.

Media consumers who can comfortably afford their children's piano lessons and private health care are effectively being subsidised by the underclass - the very people who never appear on TV except as shadowy and threatening spectres.

Radio 4 is one of the great speech radio stations in the world, but when its devoted listeners declare that the station is "incredible value", they are reminding us they should be paying more for what they like and use. It's the poor who are subsidising the station's output of stock market reports, highbrow literature and talk of renewable energy schemes - all decidedly middle-class fancies.

The often-heard phrase that "Radio 4 is worth the licence fee alone" perfectly illustrates that there's a gap between the ability to pay and reality - that something's not quite right.

The fee belongs to a time when all broadcasting was done by one company - the BBC, which represented the entire ecology of media beyond print. In a world without choice, it had to cater to everybody and argued that it must charge everybody.

All this leaves the BBC a legacy of very neurotic attitudes.

"In an age where there is no elite, how do you do public service broadcasting," asked Adam Curtis here four years ago. The BBC frets about appearing to be "elitist" - but elitism is what the BBC has done very well. Elitism is really the strongest moral argument for a media tax. The market may not provide this material, which is valuable and doesn't appear out of thin air. So to get it made, you have to pay for it somehow.

Shackled to the fee

These discussions on payment are beginning to get seriously interesting. As I hinted in my last piece, a fairer revenue strategy terrifies the BBC - but not half as much as it terrifies the BBC's rivals.

As a thought exercise let's imagine a company we'll call NewBBC. NewBBC would be allowed to bundle telephone and broadband services, just like everyone else can - it would be unfair if it couldn't. NewBBC would be allowed to borrow money on the capital markets for ambitious expansion, just as telcos can (and must) do today. NewBBC would be able to outbid anybody for sporting rights, and also be able to monetise its archive. If you were Adam Crozier or James Murdoch, NewBBC - a BBC that's free of commercial restrictions - is the last thing you want to see. It would be a global player with incredible resources and brand.

(Some of this the BBC is already considering, we note, so the precedent is being set.)

So what happens? A strange silent agreement falls over the TV industry. Of the two evils, a BBC backed by an "unfair" compulsory tax is much more preferable to ITV and BSkyB than an 800lb gorilla romping free.

The regressive nature of the tax - and those 140,000 new media criminals being created every year - is used to lobby against and weaken popular support for Auntie. But for rivals, the licence fee must stay, because the fee means all kinds of commercial restrictions on the BBC remaining in place. The BBC must remained chained to it. This is an extremely cynical strategy - but what a cynical world it is out there.

You may have noticed. ®

With piracy and civil disobedience on such a large scale, it's strange that we haven't heard a peep from consumer groups, digital rights "activists", anti-poverty campaigners nor tax-fairness agitators. The silence is deafening. Could anyone tell me why that would be?