Hands on with Kinect Star Wars

First look I had a chance this week to play on a near-final build of the upcoming Kinect Star Wars to get an impression of the game ahead of its launch early next month.

The title has come a long way since its E3 2011 build - my last attempt to wield an invisible lightsabre. If you exclude any in-front-of-the-mirror embarrassments at home, that is. 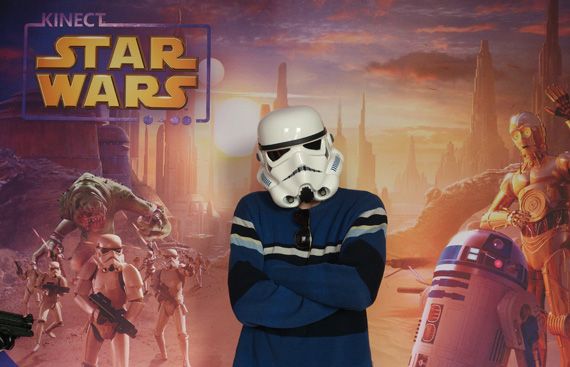 Unfortunately, the game drew more frustrations than excitements and as time went on, the potential I saw last year was soon forgotten. While there are five different modes to keep gamers occupied, the only audience likely to find huge amounts of enjoyment are those born after The Phantom Menace hit cinemas.

First off, there's the extremely linear campaign mode, "Jedi Destiny". Here your character is taken through a story set between the end of Episode I and Episode III, and you get to swing lightsabres, use the Force and jump around like a frog on amphetamines.

There were plenty of instances where the Kinect didn't register my moves and despite the silhouette of a human in the bottom left-hand corner of the screen telling me what I need to do, I was often baffled. Do I use telekinesis, jump, swing my weapon, or what? 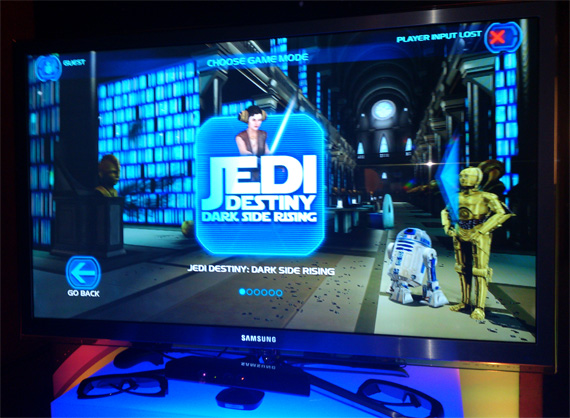 The menu system, hosted by the quirky droids of the Star Wars galaxy

While the lightsabre does match the movement of my arm without actually having one in hand, the constant waving soon became too much of a frustration to bear. Perhaps a port to PlayStation Move could solve that issue, but waving a glowing orb around is hardly my idea of acting like a Jedi.

Leaning forward to move was often unresponsive, and overall I just got bored - and extremely tired - very quickly. Gameplay was too repetitive and nothing really grabbed me as that entertaining. The linearity, an almost rail-like system, felt slightly Time Crisis-esque, although if I entered an arcade in the 1990s and had the choice to slot coins into a Kinect Star Wars machine, I'd soon go and spend my money elsewhere. Air Hockey anyone?

I decided it was time to try some of the other modes, ones that I hadn't yet seen, such as the much hyped Pod race feature.

Here, the fact you have to hold out your arms in front to steer the vehicles meant more punishment for my already aching limbs. Pulling back and releasing forward gives the Pod a power boost, but other than that, there isn't much to it. Stunning visuals in 3D does little to claw back dignity. Star Wars: Episode I Racer on the PC back in the day may not have had the same graphical prowess, but it was a far more riveting game.

Bing Maps relies on Wikipedia? Even a bit? Umm, guys, you do know anyone can edit it?