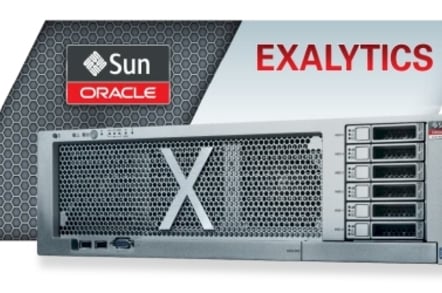 Analysis Oracle has begun shipping its Exalytics in-memory appliance, and if you are thinking about using one of these devices, you had better brace yourself for an intense negotiation about deep price cuts, as well as writing a big check to Oracle even after you get a good deal. Exalytics ain't cheap.

And that is not necessarily a problem competitively speaking, either. Oracle rival SAP is charging a pretty penny for its HANA in-memory appliance, boasting $200m in revenues from 200 customers in the past six months, at an average of $1m a pop.

The Exalytics In-Memory Machine, as Oracle sometimes calls it, is database appliance based on the company's high-end x86 server, the Sun Fire X4470 M2 announced last June. Technically, this in-memory appliance is known as the Exalytics X2-4, and there will very likely be other models scaling up and down the line at some point. Oracle previewed it back in October 2011 at its OpenWorld conference, and started shipping at the end of February.

Oracle slaps a metal X on the front of the X4470 M2 chassis and loads up this four-socket rack-mounted machine with 1TB of DDR3 main memory and four ten-core Xeon E7-4800 "Westmere-EX" processors from Intel. Each of those cores has two virtual execution threads, for a total of 80 threads. Those threads are the key to the Exalytics appliance, which has been equipped with parallelized implementations of Oracle's TimeTen in-memory relational database and Essbase multidimensional OLAP database.

In addition to parallelizing the TimesTen and Essbase databases, Oracle has cooked up compression algorithms for these two in-memory database implementations that allow anywhere from 5TB to 10TB of data to be stored in compressed form inside the databases of the machine, which reside in main memory. Thanks to those data compression algorithms, and the fact that the data resides in memory - which is roughly 1,000 times faster than disk - the Exalytics appliances can scan databases at a rate of 200GB/sec.

The server has two quad data rate (QDR) 40Gb/sec InfiniBand ports to link out to Exadata database appliances, as well as two 10 Gigabit Ethernet ports and four Gigabit Ethernet ports for linking out to end users who want to query the system. The Exalytics appliance has what Oracle CEO Larry Ellison called a "heuristic adaptive in-memory cache." This means that the Exalytics appliances watches what queries end users run on the box all the time and makes sure to pre-cache the data from the appliance (or perhaps another database or application source) in memory so it is available before they might run the query next.

Oracle could have built the Exalytics platform with its eight-socket X4800 M2 using ten-core Xeon E7-8800 processors, but has instead told customers who need more Exalytics capacity to cluster machines, according to this Oracle brief (PDF). Oracle also suggests that Exalytics machines be clustered for high availability, since they constitute a single point of failure.

Now that the Exalytics appliance is shipping, Oracle has supplied pricing (PDF) for the box and its software stack. The base X4470 M2 server as configured with four Xeon E7-4800 processors, 1TB of memory, six disks, a RAID disk controller, and the networking features above costs $135,000. Oracle premium support for systems, which includes the hardware and base operating system, costs $16,200 per year for the machine, and t runs Oracle Enterprise Linux, not Solaris.

You can buy the TimesTen in-memory database tuned for the Exalytics iron in two ways: on a per-processor basis and on a named user basis. Oracle is charging $300 per named user for this machine per year, and required you to have a minimum of 100 users on the box, which gives a base price of $30,000. Support costs another $66 per user per year after that.

This is the cheapest way to get this software. Like other Oracle code, the TimesTen database tweaked for the Exalytics appliance is also available on a per-processor basis for an unlimited number of users. Remember in the Oracle world, a processor is a core and this machine has 40 cores. So at $34,500 per core, that works out to $1.38m for licenses and another $910,800 for three years of maintenance.

By the way, that tuned-up TimesTen database for the Exalytics is more expensive than the free-standing TimesTen on the per-processor basis, which costs $23,000 per processor. But oddly enough, Oracle is charging $460 per user for the free-standing TimesTen database designed for high-speed OLTP, compared to $300 per user on the Exalytics. If you don't get the idea that you really want to buy per user, I don't know how more obvious Oracle could make it.

In that base configuration with 100 named users, you're in for $233,400 for the system with three years of maintenance.

But wait. There's one more thing. The Exalytics appliance requires a license to Oracle Business Intelligence Foundation, and an enhanced version that has been optimized to run on the Exalytics appliance. The Exa price list referenced above did not show this item on there as a priced item.

But the Oracle software price list (PDF) shows this costing $3,675 per named user or $450,000 per core. If you go with the base 100 named users, then the complete Exalytics stack – server, TimesTen, and BI Foundation Suite – and toss in three years of maintenance, you are now up to $843,450.

Don't even think of paying for BI Foundation Suite on a per-processor basis. Your CFO will just laugh at you. Even if you can get the processor core scaling factor on this software, you're talking about $9m at list price for an unlimited number of users. ®

But warns it will bail if something better comes along