The BBC's spinners have worked themselves into a right state over the news that filming has kicked off on the seventh series of Doctor Who. Viewers are promised 14 "blockbuster-movie episodes" as Arthur Darvill and Karen Gillan embark on "their final, rollercoaster voyage" with Matt Smith's Time Lord. 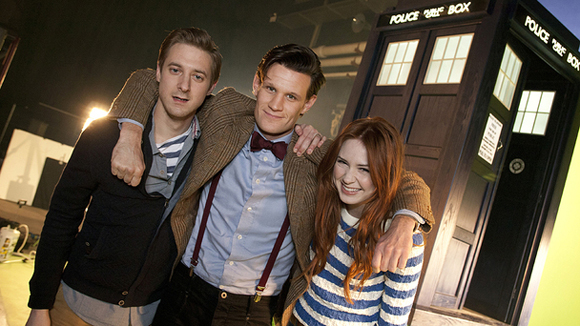 Smith described his reunion with "two of my closest friends" as "thrilling and exciting", while Gillan joined the love-in with: "It's just brilliant to be back on the TARDIS with Matt and Arthur for our craziest adventures yet."

Quite how Darvill and Gillan - who play Rory and Amy Pond - exit Doctor Who remains to be seen. Steven Moffatt teased last December: "The final days of the Ponds are coming. I'm not telling you when or how, but that story is going to come to a heartbreaking end."

If the Beeb's press release is to be believed, it's unlikely fans' nerves will hold out until that fateful moment. It gushes: "Prepare yourselves for thrills, adventures and dramatic surprises as the show builds towards its enormous, climactic 50th anniversary year. Fourteen big, blockbuster-movie episodes - each a brand new epic adventure featuring new monsters and some familiar foes as you've never seen them before." ®