Mars has given nuclear spacecraft engines a new lease on life, with nuke ships being named as a top priority – along with electrical propulsion – in a new report that recommends what NASA should focus on in coming years.

The two propulsion systems prioritized in the 468-page report by the National Research Council (NRC) – which has the equally voluminous title of "NASA Space Technology Roadmaps and Priorities: Restoring NASA's Technological Edge and Paving the Way for a New Era in Space" – includes an oldie but a goodie, electrical propulsion (EP) systems, and revives the never-say-die dream of nuclear thermal rockets (NTRs).

EP systems, the report explains, use "electrical power produced onboard a spacecraft to accelerate propellant to extremely high speeds." Solar-powered EP systems such as arcjects, ion thrusters, and Hall thrusters (like the HTCs that recently saved the US Air Force Command's AEHF satellite's bacon), are currently used in over 230 spacecraft for maneuvering and other purposes.

NTRs, however, are another matter entirely. As the report reminds us, a development effort by the name of Project Rover was begun way back in 1951, and tested over 20 reactors and engines with thrust levels of between 7,500 and 25,000 pounds, before culminating in the Nuclear Engine for Rocket Vehicle Application (NERVA) system. 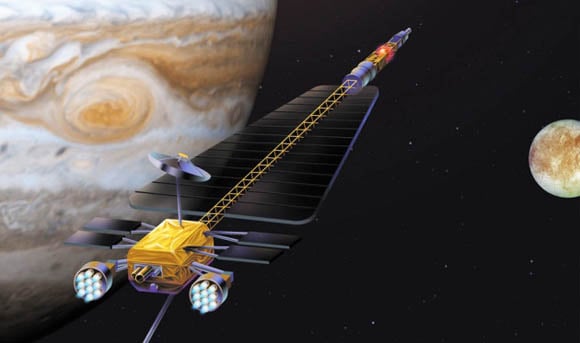 Nukes to Mars – and beyond (source: NASA/JPL)

NERVA was an impressive beast (PDF) that managed, the report says, to fire for almost two hours with 28 restarts – not too shabby. However, Project Rover – unfortunately for NTR buffs – was discontinued in 1971, and since then only what the report characterized as "intermittent demonstration efforts" have been undertaken.

Since Project Rover was abandoned, the report laments, there has been – quite understandably – a loss of experienced personnel and facilities.

"The immediate challenge is to capture the engineering and technical knowledge base of the NERVA program," the report advises. Also suggested is an upgrade to NERVA's graphite-based fuels, substituting them with more modern fuels that would "ensure a radiation-free exhaust." Radiation-exuding fuels might be acceptable in space, but ground-based testing would obviously be problematic.

The report suggests that development work begin on NTRs with 5,000 pounds of thrust, then move up to engines with 20,000 to 25,000 pounds of thrust. "Such a system would have enough thrust for a crewed Mars mission," the report contends, adding that "The reduction in launch mass enabled by this technology could significantly reduce the cost and mission complexity of crewed missions to Mars."

Nature reports that NASA's chief technologist Mason Peck says that he'll use the NRC's priority list as a guide when making funding decisions. Unfortunately, that journal also points out the inarguable fact that politics will rear its ugly head in congressional wrangling over budgets. As Nature explains, "the image of a nuclear-powered spacecraft blowing up on the launch pad or on its way to orbit is a powerful deterrent."

Of course, rational arguments will be made in support of nukes in space – the fact that the reactor wouldn't even be fired up until safely aloft being just one. But unfortunately, as has been proven in scientific and technological debates ranging from climate change to evolution, reason often takes a back seat to entrenched beliefs and constituents' fears, interests, and ideologies. ®

Chang'e 4 wakes and Yutu 2 stretches its solar panels for another day... on the friggin' MOON