Kids should be making software, not just using it - Gove 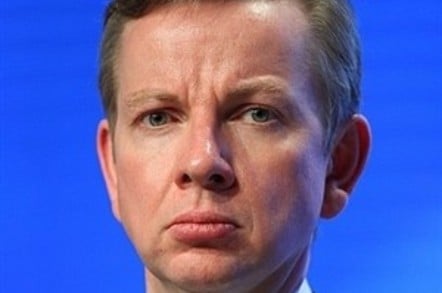 Education Secretary Michael Gove today proposed killing off Blighty's ICT curriculum in September to give it a thorough reboot.

Launching a consultation into his plans, Gove suggested that from the start of the next academic year, schools should be able to teach what they want in computer classes. The Tory minister recommended MIT's Scratch - a programming language for newbies - and the Microsoft and Google-approved Computing at School course for 11 to 13-year-olds.

The current ICT curriculum is "dull and demotivating", he said in his speech to the BETT conference, and tweaks to qualifications and the curriculum in past have not led to "significant improvements". In response, the Department of Education will take steps to suspend the ICT curriculum, attainment targets and tests for the next two years until a replacement curriculum is instituted in 2014.

Technology in schools will no longer be micro-managed by Whitehall. By withdrawing the Programme of Study, we’re giving teachers freedom over what and how to teach, revolutionising ICT as we know it.

But after years of telling pupils how to make Excel spreadsheets, will our nation's corduroys be up to delivering these creative and challenging new courses? Gove expects so, once the curriculum is out of the way:

Imagine the dramatic change which could be possible in just a few years, once we remove the roadblock of the existing ICT curriculum. Instead of children bored out of their minds being taught how to use Word and Excel by bored teachers, we could have 11-year-olds able to write simple 2D computer animations using an MIT tool called Scratch. By 16, they could have an understanding of formal logic previously covered only in University courses and be writing their own apps for smartphones.

Gove backed up the promises with some practical suggestions: funding for schools that want to share technology resources and "a focus on improving initial teacher training and continual professional Development for teachers in educational technology".

Despite the shortage on details, the move has been broadly welcomed with spinners from Google, Facebook and Microsoft applauding the change. Richard Hadfield, chairman of the education group in UK tech sector trade body Intellect, said:

We are pleased that Michael Gove has agreed with our recommendation to scrap the current dull and uninspiring ICT lessons and replace them with lessons which will engage, excite and inspire pupils. Equipping pupils with real programming and computer science skills is vital to ensuring the future of the UK ICT sector and our whole economy.

Criticising the speech, teachers union NASUWT challenged the notion that current IT teaching was "dull" and said that removing the curriculum in the subject risked short-changing pupils and creating a free for all, adding that school teaching shouldn't be left to the agendas of multinational companies.

The Reg asked the Department of Education to explain how students would be examined or awarded qualifications if there was no curriculum to test them on - for example whether ICT GCSEs be continue to be awarded in 2013 - but we have yet to hear a reply.

The answer could come from the Computing at School programme which suggests a division between IT and computing: "We should teach IT skills to every student, but we should not confuse that with GCSE and A levels in computing."

Gove will make a final decision on axing the curriculum after a 12-week public consultation period. The removal of the curriculum would only be a temporary measure between 2012 and 2014, after which the review of the National Curriculum will kick in with a revised edition for all subjects including ICT. ®

If Matt Hancock says it's a bad idea, it's a really bad idea