$376m in stocks for taking over from Jobs 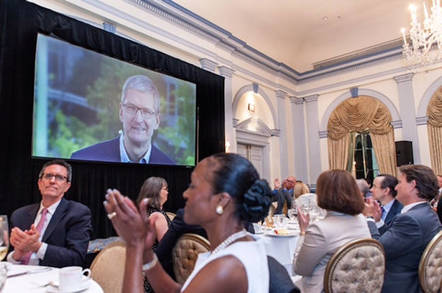 Apple CEO Tim Cook bagged a huge award when he took the helm at the fruity firm last year.

Cook received one million restricted stock units (RSU), an award worth over $376m according to the closing share price for Apple on 24 August 2011, the date the stocks were signed over.

However, he can't rush out and sell straight away. The stocks are restricted to what's called a vesting period, a typical stock reward for company executives intended to motivate them to make sure the firm does well.

Cook can take full control of half the stocks in 2016, five years after the award, and the remainder in 2021, 10 years after the shares were first assigned, providing he remains employed by Apple.

Although it's tantalisingly out of reach for now, the incentive is a sizeable one-off payment to a single recipient, which Apple said in a filing had been assigned based on Cook's handling of the position when former chief Steve Jobs fell ill and on recommendation from Jobs himself.

"In light of Mr Cook’s experience with the company, including his leadership during Mr Jobs’ prior leaves of absence, the board views his retention as CEO as critical to the company’s success and smooth leadership transition. The RSU award is intended as a long-term retention incentive for Mr Cook, and, accordingly, should be viewed as compensation over the 10-year vesting period and not solely as compensation for 2011," the company said.

The award was, of course, in addition to his base salary, a by-no-means measly sum of $900,000 last year, which is increasing to $1.4m this year, and his bonus, which last year was 100 per cent of his base salary as the company got more sales and income than it was targeting.

Predecessor Jobs was only taking a salary of a dollar a year when his time at the company ended last year and he wasn't part of the bonus scheme either – but then, according to the filing, he was the owner of around 5.5 million shares of common stock.