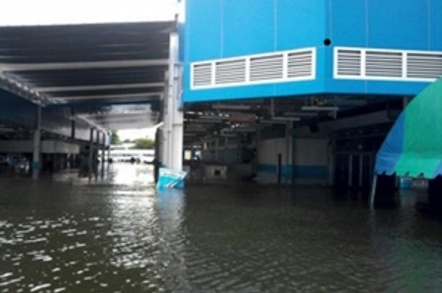 Tied in a strangling knot by the Thai floods, the world could be shy of 70 million disk drives this quarter, sending retail prices rocketing, limiting PC supplies and creating an opening for flash drives.

Taiwanese manufacturers in the PC supply chain reckon we will see 110 to 130 million hard disk drives (HDD) this quarter instead of the 180 million needed to satisfy demand, a 50-70 million shortfall, reports Digitimes. Supplies could improve as early as the first quarter of next year but it might take the whole of 2012, and even some of 2013 before supply is fully back to normal.

Retail channels in Taiwan have seen a 20 to 30 per cent HDD price rise since the flooding shortages commenced and another 10 per cent rise is expected in December. Vendors with substantial OEM supply contracts get priority – leaving retail buyers scrambling for the scraps.

This creates a huge opportunity for solid state drive (SSD) vendors who can offer far better performance than spinning disk but at much higher prices per GB. There is evidence that retail SSD prices are falling and prices should continue to fall as 3-bit flash comes on stream for SSDs next year as expected and the industry collectively transitions from 39-30nm process technologies to 29-20nm ones or even to 19-10nm processes, with consequent increases in chip output per wafer.

Luckily for HDD vendors it takes a couple of years or more for new flash fabs to be built and start producing NAND chips so their market should come back but the flash fab owners must have scented their opportunity and be planning major fab construction products.

It's going to be all-out war and the only practical route for the HDD vendors to escape the coming SSD trap is go the hybrid route, and add flash chips to their disks, gaining near-flash speed while retaining a capacity advantage. This is surely becoming a no-brainer of a decision.

Overtime the flash capacity of their drives could increase, so much so, that the spinning disk could be dropped and a pure flash drive result. ®

Getting fat off the NAND's just a flash in the pan...