The X-Gene design is aimed to make a server more like an iPad, with idle power of under 500 milliwatts per core and sleep mode of 300 milliwatts; active power is expected to be around 2 watts per core.

The chip will also have dynamic frequency scaling – what is generally called a turbo-boost mode – that allows the clock speed of the chip to be goosed when a job needs faster single-thread performance and there is enough spare thermal capacity to allow a core to run hot for a bit. Moreover, server vendors who adopt the X-Gene chip will be able to set the thermal design point and clock speeds in the chips to meet performance requirements and make the heat tradeoffs – and lock those TDP settings in. 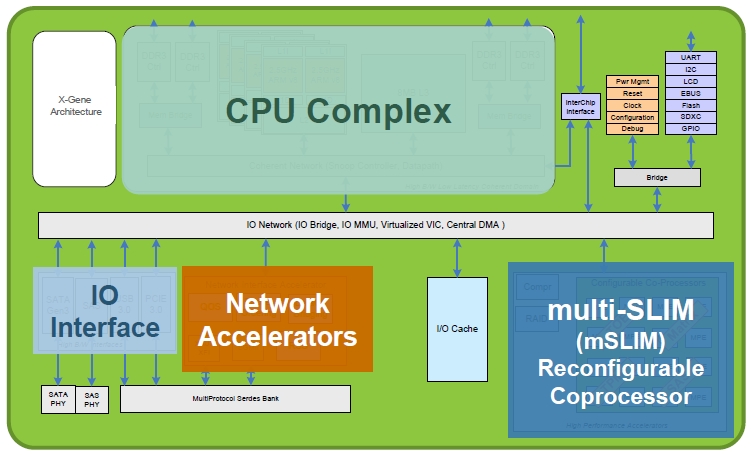 But wait, there's more. The X-Gene has a fully non-blocking, 1Tb/sec interconnect, which can be used to feed data between multiple X-Gene sockets at 100Gb/sec speeds, and that provides nearly 80Gb/sec of aggregate bandwidth.

Here's the interesting bit: this non-blocking fabric allows an X-Gene server to scale from 2 to 128 cores in a fully cache coherent server image. So not only can the X-Gene be set up to be a baby symmetric multiprocessing server inside of a single chip, that SMP can be extended across multiple X-Gene chips – and in a glueless fashion that does not require extra chips.

The X-Gene chip also has on-chip CPU and I/O virtualization, just like x86, Sparc, Power, and Itanium chips do. The architecture also allows for various kinds of offload engines to be plugged in and perhaps integrated on the chip package.

The chip is not yet ready, but Applied Micro has cooked up a board that simulates 128 cores and all the I/O features, and that can run Fedora or Ubuntu Linux; it's powered by a bunch of Vertex FPGAs, and is show below: 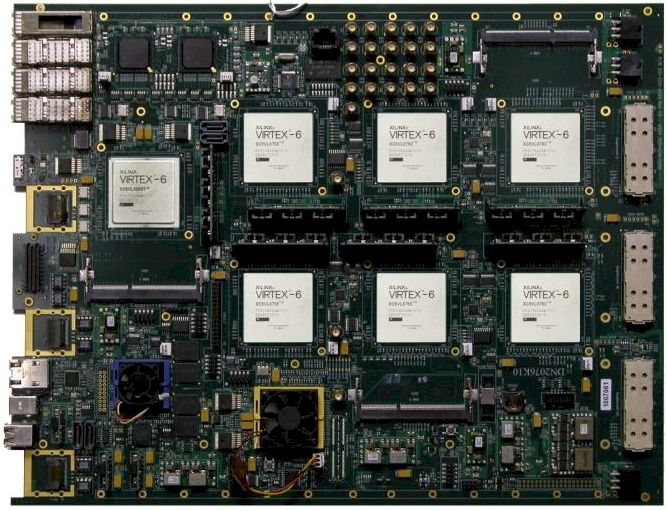 The X-Gene simulation boards will be ready for partners in January 2012, and Applied Micro expects to have early silicon available for the real X-Gene chip in the second half of 2012 – that's anywhere from a year and a half to two years ahead of when ARM Holdings expects for prototypes of the ARMv8 to appear in systems based on its own reference designs. Applied Micro is smart enough to know that the server industry can't wait that long for a 64-bit chip, even if smartphones and tablets can.

Applied Micro has tapped Taiwan Semiconductor Manufacturing Corp as its foundry for the X-Gene chips, and will first etch the chips in its 40 nanometer processes, then follow-up with kickers using TSMC's 28nm processes. It seems likely that at the 28 nanometer node Applied Micro will significantly boost the X-Gene core count, maybe to four cores and maybe as many as six or eight. ®