The first images are in from the immense ALMA radio-telescope array, under construction at 16,500 feet in the Chilean desert, and they reveal a galactic collision of near-unimaginable violence and equally mind-boggling beauty.

The images show the collision of paired galaxies, NGC 4038/4039, which combine in what's become known as the Antennae formation. The two spiral galaxies that form the Antennae are merging into one, with the resulting compression of gas and dust birthing new stars. 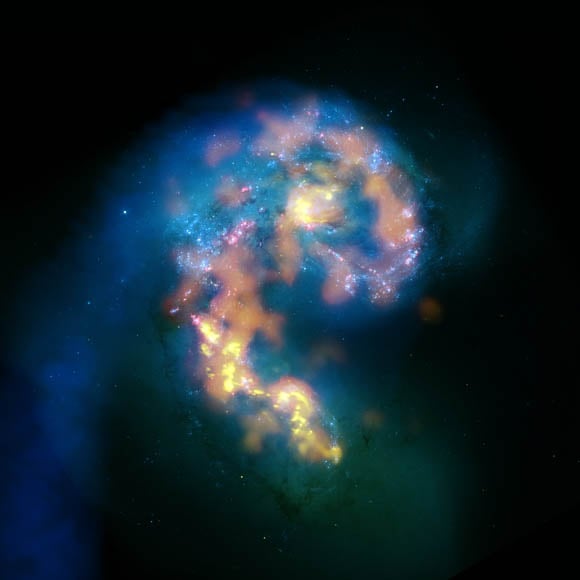 These first images were taken with only 22 of ALMA's 66 eventual dishes in place – more images can be found here. When the final dish is fired up sometime in 2013, the billion-dollar array will range over approximately 100 square miles of the high, dry desert.

The Atacama desert in central and northern Chile is one of – if not the – driest places on earth. How dry is driest? Well, in some parts of it, rain has never been recorded to have fallen.

This extreme dryness means that the atmosphere at 16,500 feet in the Atacama desert is essentially devoid of water vapor – and why that is important is explained by the "Millimeter/submillimeter" part of ALMA's name. 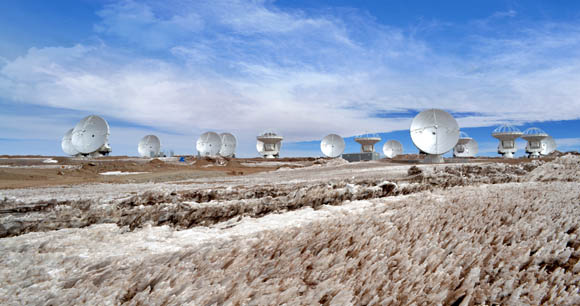 ALMA at sweet sixteen – dishes, that is (click to enlarge)

ALMA's radio dishes capture the electromagnetic spectrum at wavelengths in the millimeter and submillimeter range, which is far longer than that of visible light. Red light, for example, extends roughly from 630 to 740 nanometers - a wave in the millimeter range of the electromagnetic spectrum is about 13,700 to 15,625 time the length of a red light wave. And red light has the longest wavelength of visible light.

The advantages of gathering astronomical data from the millimeter and submillimeter range is that information gathered in that range of the spectrum isn't blocked by the clouds of dust and gas that obscure optical telescopes. This ability allows ALMA to peer inside the clouds that shroud star creation.

The challenge of millimeter/submillimeter astronomy – well, one of the many challenges – is that waves at those lengths are blocked by water vapor, making observing them well-nigh impossible in most areas of Terra Firma. Hence the creation of ALMA on the Mars-like terrain of the Atacama.

"ALMA's test views of the Antennae show us star-forming regions on a level of detail that no other telescope on Earth or in space has attained," said ALMA project manager Mark McKinnon. "This capability can only get much better as ALMA nears completion." 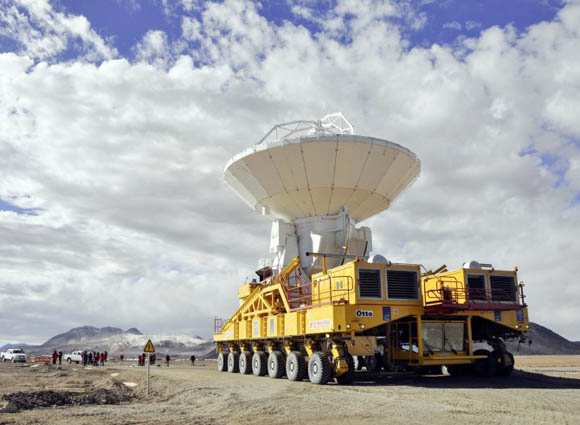 A 100-ton ALMA antenna aboard its custom-built transporter (source: Wired)

The National Radio Astronomy Observatory has produced a gee-whiz video with more details about ALMA, and for a deep dive into millimeter/submillimeter astronomy, you can check out Thomas Wilson's aptly titled paper, "Introduction to Millimeter/Sub-Millimeter Astronomy.

But if you really want to knock yourself out, pick up a copy of "Science with the Atacama Large Millimeter Array: A New Era for Astrophysics", which can be purchased at Amazon for $179. ®