Watching DVDs may be bad for your health - specially if the drive on your laptop decides to shoot you.

William Warner suffered horrendous hand injuries after his notebook spat out a sharp sliver of metal that pierced his palm, the New Zealand Herald reports. 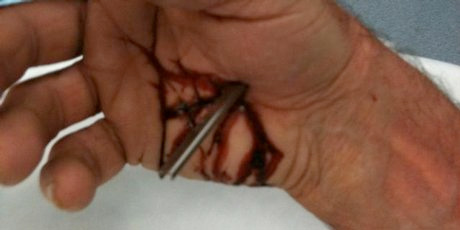 The component in question was the optical drive's track-holder, an 11cm blade of sorts, clearly capable of inflicting stigmata-like injuries if thrust out at sufficient speed.

No one has been able to explain why the part flew out with such force. Toshiba, which made the laptop, was quick to point out the incredible rarity of such an accident, and insisted its products are safe.

Local Toshiba marketing chief Mariana Thomas told the paper: "Toshiba does not believe that the circumstances of the case raise any general safety issue with its products and stands behind their safety.

"We are not aware of any incident with a Toshiba product resulting in a person suffering injuries of a similar nature in New Zealand or elsewhere in the world."

Toshiba decided a fresh laptop was the way forward, and offered Warner a replacement. The 54-year-old is also seeking financial compensation, a process yet to be settled. ®

We lose money on repairs, sobs penniless Apple, even though we charge y'all a fortune

Spare a thought for the lives of the creative accountants

Should I stay or should I go now? Mobile industry braces for an MWC overshadowed by Wuhan coronavirus misery