US tops the class in IT competitiveness

The United States may be messed up in a lot of ways, but it is still the most competitive country in the IT sector, according to an index put together by the Business Software Alliance and The Economist's Intelligence Unit.

The IT Industry Competitive Index ranks countries in a number of different metrics on a scale from 1 to 100, gauging the friendliness toward the IT industry (with money ultimately being the measure of amicability) in terms of the general business environment, the existing IT infrastructure, the skill level of the workforce, availability of research and development resources in industry, academia, and government, the legal environment, and the political support for the IT industry in particular.

The index was first put together in 2007 and gives a ranking for 66 different countries based on these different metrics. You can see the full report here, which shows the underlying qualitative and quantitative components of these metrics with their relative weights in the overall ranking of IT competitiveness. (Not all factors weigh in the same.)

In this year's index, the United States had a composite score of 80.5 and ranked first, while Iran was last with a composite score of 18.8. The US scored relatively poorly on the state of its own IT infrastructure, ironically enough, with a 76.5 ranking and just ahead of the United Kingdom, with its own 74 ranking in this area. Switzerland had the highest rating for its IT infrastructure among the 66 countries, pulling an 89.9, followed by Denmark at 87.2, the Netherlands at 84.3, Sweden at 83.3, Australia at 82.4, Norway at 80.2, Hong Kong at 79.7, and Canada at 76.9.

On the overall scale, Finland came in second in terms of IT competitiveness. Singapore has climbed in the rankings as it has made substantial investments in infrastructure, and knocked Sweden down a peg. The United Kingdom rose one slot with its 68.1 overall rating, and Denmark was close behind and rising with its 67.9 rating, pushing Canada down a peg.

Here's how the top 20 lined up, with more than a few ties: 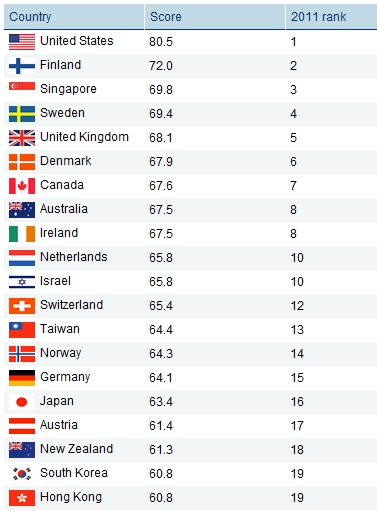 "The US is probably the world's best example of the virtues of long-term investment in the enablers of IT sector competitiveness," the BSA-Economist report says. "The US tops the index once again, its high scores across all categories reflecting not only the historical strength of its IT industry but also the high quality of its education and talent environments, its strong encouragement of innovation and entrepreneurialism, and its well-developed legal system. Recent economic and fiscal problems have not dented its clear IT industry strengths."

Malaysia jumped 11 spots in the 2011 index because of big investments it is making in R&D this year, and India jumped ten spots thanks to big investments in R&D as well as "human capital," according to the report. Singapore, Mexico, Austria, Germany, and Poland all showed gains in their rankings in 2011 compared to the prior year.

The United Kingdom has been hurt in the eyes of the BSA and The Economist because of lower enrollment in science and higher education and China's advance has been slowed because of a lack of intellectual property protection.

China ranked only 39 on the list, behind Romania and ahead of Brazil, but on the "human capital" scale, it was second only to the US, with a rating of 60.4. China tied with Australia and was ahead of South Korea, the United Kingdom, and New Zealand, mainly because of the large number of IT-related graduates it pumps out a year (400,000 expected in 2011) and the relatively good career prospects they have in their country.

"Investing in the fundamentals of technology innovation will pay huge dividends over the long term," explained BSA president and CEO, Robert Holleyman, in a statement accompanying the report. "It is also clear that no country holds a monopoly in information technology. There is a proven formula for success, and everyone is free to take advantage of it.

"We're seeing the fast-growing economies of the developing world invest heavily in things like research and development and human capital. They are moving away from a more singular focus on providing low-cost products and services. Because of that, we are moving to a world with many centers of IT power." ®