Archive your holiday snaps 'til 3011

The recording surface of Millenniata's M-DISC is virtually indestructible. The company claims that its DVD drive–readable discs will last for ... wait for it ... 1,000 years.

The deal is that the disc has a different recording medium and method than the lasers and dyes used by DVD makers. Instead, actual pits are burned into the recording medium by a laser, and the resulting disc is readable by a standard DVD drive because the DVD laser light reading mechanism works just fine. 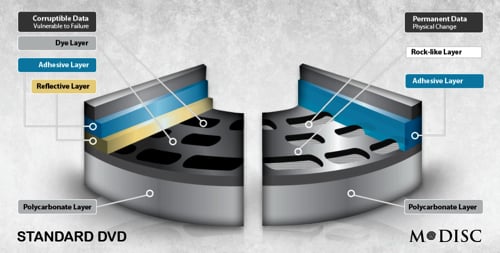 Millenniata says a DVD or Blu-ray disc will last only three to five years before its dyes degrade and the recorded signals can't be read. The M-DISC uses the same polycarbonate base as a DVD and then adds an "inorganic and synthetic material" data layer, including "metals and metalloids", with another polycarbonate layer stick on top of that with adhesive.

The M-READY drive has a higher-powered laser than the one found in a DVD writer, and it's used to etch or engrave pits or voids into the recording medium's surface. The pits are permanent, so the disc is write-once only. Millenniata colourfully calls the recording medium layer "rock-like". The edges of the pits are said to be enhanced because the melted material in the pits moves away from the heated laser spot. 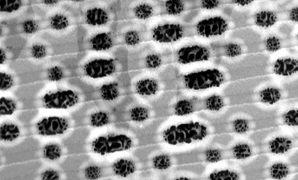 The firm calculated the 1,000-year lifespan by measuring the change in reflectivity caused by oxidation of the bare metal surface of the pit edges, with "would occur in the first few months after the DISC is manufactured." By extending that reflectivity curve over time and finding the point where it crosses from usable to unusable, they worked out their claimed lifespan.

The actual observed reflectivity change is less than 1 per cent after 300 to 350 days ... indicating the actual performance of the M-DISC data layer is significantly better than our worst-case scenario. The comparison of the actual data to the 10,000-year example is very favourable. The obvious conclusion is the data on an M-DISC should be readable for greater than 10,000 years when stored in an ordinary, dry, room-temperature environment.

But the polycarbonate substrate can't last that long and "studies conducted by the National Institute of Standards and Technology (NIST) concluded that the substrate materials in DVDs should be reliable for at least 1,000 years." So a thousand-year disc it is – though Millenniata says it lasts "forever."

The full 75-page test methodology can be found here.

What's the capacity of the disc? Millenniata says it can store three hours of video, 1,200 photos, or 100,000 documents, which might mean anywhere in the 20 to 50GB range.

The M-READY drive has a 119-volt power draw, and connects to a host computer via USB 2.0. Normal DVD burning software is used to burn (write) data to a disc in the drive. The discs should cost under $5 (£3) the company said, but this may change by the time they're actually manufactured.

Millenniata partner LG will offer a Super-Multi Drive, which will be able to read and write Blu-ray, DVD, and M-DISCs. You can submit a pre-order, and you'll be emailed when the drive is ready – and be told the price of the drive and discs, we assume.

Although the discs could last 1,000 years, if Millenniata's modelling is right, whether DVD drives will still be around then is another question. Excuse me, but I have a stack of punch cards. Does anyone have a punch card reader...?

If you have content that you absolutely, definitely, cannot afford to lose, ever, then this could be the archive technology you've been waiting for. It will come at a price – and we don't know what the price is – but as Millenniata might say, what you want to preserve is priceless, isn't it? ®

Microsoft to world: We've got open source machine learning too