The player is compatible with the usual media formats and even some less common ones such as APE audio and the new MKV3D standard. Other 3D videos play if they use the side-by-side or top-and-bottom format, but according to the small print, it won’t deal with 3D Blu-ray rips or perform 2D-to-3D conversion. 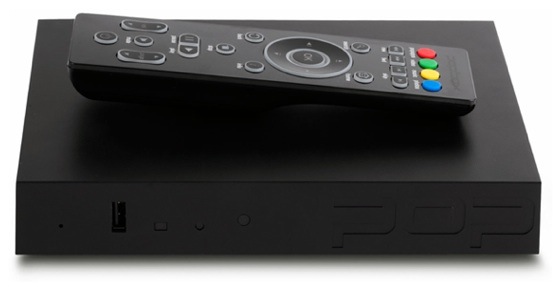 The remote, at least, is user friendly

Various subtitle and alternative audio tracks can be accessed too. It passes DTS 5.1, Dolby Digital and TrueHD through HDMI or downmixes to stereo if needed, with an alternative optical output for 5.1 audio.

As expected, it won’t play copy-protected files, including iPlayer programmes downloaded to PCs, or protected WMVs – such as Blinkbox movies – and purchased MP4 films from iTunes, including digital copies that you can download after buying a DVD or Blu-ray. Of course, if media files are unencumbered by DRM protection, the PopBox will have no trouble handling them. As a piece of hardware, it doesn’t care where your music and movies have come from.

Media streaming is never going to be a straightforward process but the products that succeed are the ones that hide the complexities and ‘just work’. The PopBox is simple enough when using an attached hard drive but as soon as you start poking about with network sharing and large libraries, this box isn’t so clever.

It's expensive compared to its most similar rivals - especially when supplier Advanced MP3 Players wants more (£139) than the US equivalent ($130), even allowing for VAT and import duty - and often too finicky to get on with.

Perhaps a couple more firmware updates will make it a better proposition, but with its current recipe, this bite-sized taste of Popcorn is more sour than sweet. ®

Thanks to Advanced MP3 Players for the review sample