So how do the Xeon E7s stack up to Itanium chips and their predecessors at the high end of the Xeon line? Answering the former is tough, but the latter is easy.

As far as Intel is concerned, Itanium has to fend for itself – and so does the Xeon architecture. 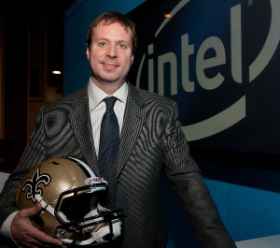 Kirk Skaugen, general manager of Intel's Data Center Group, was blunt about it talking to investors in May 2011.

"When I picked up the Data Center Group, we made one strategic flaw and that was artificially protecting Itanium and not making Xeon 64-bit," he explained. "Going forward, if the Atom micro-architecture is the right architecture, we'll go do that."

Later in the talk, Skaugen said that the situation was "no longer Itanium at the top and Xeon at the bottom" and that the chip giant was thrilled to have 20 design wins already for the Xeon E7s in mission-critical systems, with machines with 8, 16, and 32 sockets in the works.

The instruction sets of Itanium and Xeon processors are so different that it is hard to make direct comparisons. But generally speaking, Xeons will have more cores and higher clock speeds at any given time, although that may not necessarily yield more throughput on back-end systems.

Not cheap as chips

Thanks to server virtualisation and supercomputer clustering Intel has made several important changes in recent years at the high-end of the Xeon, driven by the need for more memory and I/O and bandwidth.

The Xeon 7400 processors using the old front side bus were designed solely for four-socket and eight-socket machines.

But for the Xeon 7500s launched in March 2010, Intel tweaked the Boxboro chipset to allow companies to make machines supporting two, four, or eight sockets gluelessly – meaning without having to resort to creating a unifying chipset to glue multiple motherboards together into an NUMA or SMP system. Intel did this at the request of server makers, which wanted to get fatter memory capacities on two-socket servers.

At the same time, Intel created a special variant of the Nehalem-EX processors called the Xeon 6500, which was aimed at high performance computing clusters, which only scaled across two server sockets, and which had slightly lower prices compared to their Xeon 7500 equivalents.

With the Xeon E7s, Intel has gone all the way and split the chip product line into three variants aimed at machines with differing numbers of sockets. The E7-28XX machines are aimed at two -socket servers and come in versions with 6, 8, or 10 active cores; prices range from $774 to $4,227 apiece when bought in 1,000-unit trays.

If you want to use a Westmere-EX chip in a four-socket server, then you need an E7-48XX chip, and clock-for-clock and core-for-core you are going to pay a slight premium for that (prices range from $890 to $4,394 for similar SKUs.

Now, if you want to build a box that has eight-sockets, then you need to get an E7-88XX variant, which only come with 8 or 10 cores and which have yet another price uplift. Call this the scalability tax.

Intel has not said if it is simply disabling QPI links on the chips or making good use of chips that have errors in some of their QPI links. We would like to think it was the latter and not the former, but it is probably a mix of the two.

In general, SKU for SKU, a Xeon E7 processor delivers about 40 per cent more performance than the Xeon 7500 processor it replaces. This is accomplished by a mixture of larger L3 cache, higher clock speeds, larger main memory capacity, and other tweaks.

Here is a table comparing the Xeon E7 processors to the current "Westmere-EP" Xeon 5600 processors for two-socket midrange servers as well as the new Xeon E3-1200 "Sandy Bridge-DT" processors for single-socket boxes:

The table above (also available as a xls file here) shows the core and thread count for the chips (not all chips have HyperThreading), as well as their clock speed and amount of on-chip L3 cache memory. The table also shows which chips support TurboBoost and HyperThreading, the maximum power dissipation of the chip (thermal design point, or TDP), and price per chip when bought in 1,000-unit trays.

We have also added another metric that is somewhat useful in comparing across the Xeon architectures called Cost Per Oomph. This metric takes the number of active cores and multiplies it by the clock speed and then divides it into the cost of the chip to give a relative price/performance metric. Cost Per Oomph ignores the effect of HyperThreading on relative performance and also the relative difference of theoretical instructions per cycle across the processor architectures.

Generally speaking, the Cost Per Oomph of the Xeon E7 processors is quite a bit higher than for the Xeon 5600s, and that is the price you pay for memory scalability and higher core counts. Unless you buy a Xeon 5600 system that has its own memory scaling electronics (as Cisco offers), you top out at either 6 or 9 memory slots per socket, or 192GB or 288GB per two-socket machine using 16GB memory sticks.

The Xeon E7s can support 16 slots per processor, and that works out to 512GB on a two-socket machine using 16GB sticks, or 256GB using somewhat cheaper 8GB sticks. Also, the Xeon E7s can support 32GB memory sticks, doubling up to 1TB of memory if need be across those 20 cores and 40 threads. In general, the Xeon 5600s have higher clock speeds but lower cache memory sizes.

You have to pick your chips carefully based on the characteristics of the workloads. The good news is that the Xeon E7, Xeon 5600, and Xeon E3 chips are all absolutely compatible, although there may be some tuning required to get closer to that theoretical "oomph".

The Xeon E3-1200 chips, based on the Sandy Bridge cores, are just wickedly inexpensive compared to the Xeon E7s, but then again, they are limited to 2 or 4 cores and a single socket. (In the table, the models shown with the asterisk are Xeon E3-1200 chips with integrated HD Graphics GPUs and are really aimed at uniprocessor workstations rather than servers.

Next page: A bunch of benchmarks: Xeon E7 systems vs. rest of world
Page:
Tips and corrections
22 Comments