It's all about the lean, mean green 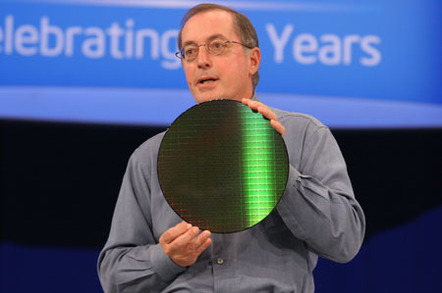 If there were any lingering questions as to whether Intel would use its 22-nanometer Tri-Gate process technology to bake chips based on the ARM architecture, the company's CEO has put them to rest.

"The short answer is 'No'," Paul Otellini told his audience at Intel's Investor Meeting 2011 in Santa Clara on Tuesday in response to a question about whether his company would take advantage of its latest chip-baking technology to enter the ARM-dominated ecosystem of smartphones and tablets.

Otellini's reasoning was straightforward: there's more money to be made sticking with Intel architecture.

"We have an ARM license, an ARM architecture license," he reminded the gathered investors and reporters. "But the important thing for us is to figure out how to get paid and how to be present. And we think the best way to be paid and present ... is to build best-of-class chips."

He also offered the opinion that the compute core of a mobile system-on-chip (SoC) isn't the driver of power and performance considerations. "It's really not the core, the architectural core that makes the difference here," he said. "It's the stuff you put around it, the other power management features and things."

ARM, from Otellini's point of view, doesn't offer enough advantages for Intel jump into the ARM ecosystem. "The [Intel architecture] versus ARM – there's no power penalty that we've made. In fact, the size of the core is really quite trivial compared to the SoCs we're building nowadays."

"I think we could do a better job if we build out this continuum on IA," he said, referring to Intel's grand scheme of dominating every phase of computing, from the smartphone in your pocket to the data center in the cloud which is feeding that smartphone.

Otellini emphasized Intel's position in that continuum during his keynote, when he rhetorically asked his audience if they could name the silicon vendor who was making the most profit from the smartphone revolution. His answer: "Intel."

What he was referring to was not the silicon in the smartphones themselves, but in the data centers that are serving them. According to Otellini, one server is required for every 600 smartphones or 120 tablets. And since Intel and its Xeon processors rule the server roost, as he put it, "the money is in the infrastructure."

That said, Otellini remains confident that his low-power chips would be "very successful" in the smartphone market – but he was careful to qualify that message by reiterating that Intel's march into smartphones won't begin until next year.

But will Intel crack its way into those smartphone cases with an ARM-cored SoC? "The short answer is 'No'," Otellini repeated. "We have no intention to use our license again to build ARM." ®