Ironed out the creases

Researchers have developed a display that folds in half without a visible crease, paving the way for a range of foldable mobile concepts to become reality.

A team at the Samsung Advanced Institute of Technology in South Korea have built a prototype of the screen, publishing the results of their work in a recent issue of Applied Physics Letters.

While boffins had previously struggled to eliminate the crease between panels, this study, titled Mechanically and optically reliable folding structure with a hyper-elastic material for seamless foldable displays, appears to have found the solution. 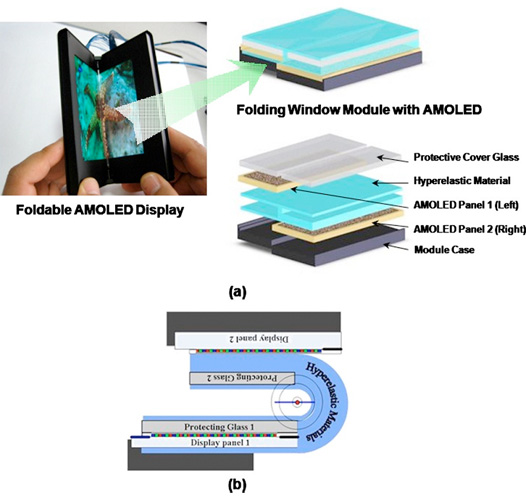 Made from two AMOLED panels, silicone rubber, a protective glass cover and a module case, the display features a 1mm folding radius, so that the halves can rest on one another at a 180° angle.

After 100,000 fold cycles, the team recorded just a six per cent decrease in screen brightness along the seam - barely recognisable to the human eye, they say.

Talking to PhysOrg.com, co-author HongShik Shim said: “All the materials in a foldable window unit - glasses and silicone rubber - must have almost the same optical properties and attach to each other strongly without any optical property change.”

Despite the hyper-elastic silicone rubber and high-end AMOLED displays being commercially available, to see the product brought to market, new processes and materials would need to be developed. Shim reckons this could take a year or two.

Perhaps it won't be long though before we see designs such as the Nokia Scentsory Concept, spring up on a shop shelf near you. Well, minus the scratch and sniff features, of course. ®