Come on - it's a surface ship. Why does it need to be autonomous?

One should add that ACTUV comes to us courtesy of famous Pentagon crazytech bureau DARPA. This means that the chance of a fleet of Mary Celeste-class crewless subhunters emerging one day from US shipyards is slim at best: about the same as the chance of a legion of autonomous robot land-steamer tanks able to harvest biomass fuel and so potentially end life on Earth like a plague of smoke-belching mechanical locusts.

The ACTUV plan made a fair bit of sense as originally described - for use against conventionally-powered submarines, to replace manned units in tracking these over long distances. An ACTUV, being unmanned and much faster than a battery-powered craft, could simply sit almost on top of the sub and keep it locked up using powerful active sonar. Not many human captains would want to do this, as it would involving sitting permanently within range of the sub's torpedoes. 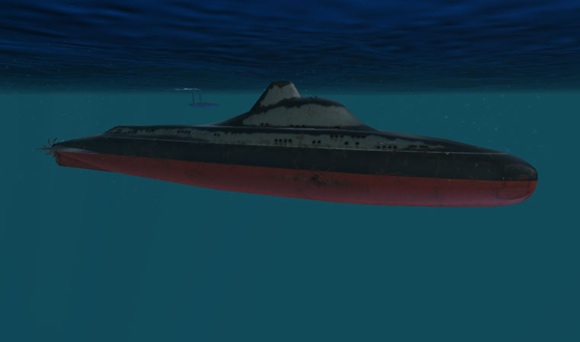 Don't know why we're even bothering to use sonar - you can see for miles. Glass-bottomed boat would do the job.

Even so, if a conventional sub commander decided to sink his annoying robotic shadower, he would be unable to get away: battery subs are limited to a crawl if they want to travel any distance submerged, and surfacing or putting up snorkel or 'snort' masts (to run diesels) is suicide as airborne radar can sweep huge stretches of ocean - radar is much better than sonar. Responding manned units starting from the "flaming datum" of the destroyed ACTUV would soon find and destroy the sub as it crept away - all the sooner if it surfaced or put up masts in order to flee more quickly.

So there is no call for much autonomous cleverness by the ACTUV. Following a sub at close range on active is simple enough. Automated dodging of other surface vessels is, again, quite simple under the International Regulations for Prevention of Collisions at Sea, much though ignorant young watchkeeping officers sometimes struggle to grasp the principles. Sure, a wily sub-driver might seek to draw his shadower into a potential collision situation, hoping to force the ACTUV to break off: but the success or failure of this will depend entirely on sonar conditions at the time and the minimum safe passing distance programmed into the ACTUV, not on any cunning tactics.

In any case, an ACTUV chasing a sub could easily be said to be engaged in "underwater operations" and thus claim the status of a vessel "restricted in her ability to manoeuvre" under the Regulations - other ships would be obliged to get out of her way.

All this to one side, there would seem little reason in any event to faff about making the ACTUV highly autonomous. As a surface vessel, there's no difficulty about maintaining a satellite comms link back to a control station where a human operator can run the ship. Existing Predator roboplanes are already handled from the far side of the world in this way, in large numbers. In their case this raises their manning costs noticeably, but this wouldn't apply to ships which would normally require a crew of hundreds.

What makes the ACTUV useful is the fact that it risks no human crew at close range with a potentially hostile sub. A single surface-warfare officer handling it over a sat link doesn't undermine the concept at all: all advanced navies have swarms of surplus officers sitting about on shore anyway, it would be a good idea to put them to work.

So the concept of the new ACTUV game - that it will be used to generate autonomous sub-hunting algorithms - seems rather suspect right off. ®

*Submariners, especially aboard conventionally-powered boats of the sort envisaged as the threat here, generally get very little sun, live at very close quarters (often "hot bunking", ie taking it in turns to sleep in a given bed) and aren't prone to wasting fresh water on personal hygiene or laundry.

Lewis Page was a Royal Navy officer for 11 years.