webOS among the Windows 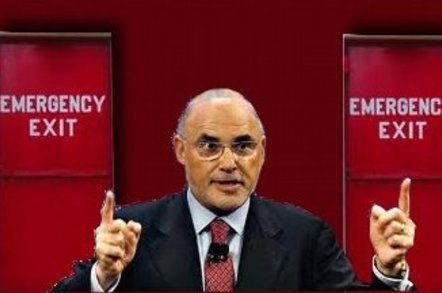 Analysis Microsoft's biggest partner has laid a cuckoo's egg in the nest. Next year, every Hewlett-Packard Windows PC will ship with the Linux-based webOS as well.

Recently recruited chief executive Leo Apotheker told Businessweek that putting webOS on all HP's PC would encourage software developers to create "a wider range of applications that would differentiate HP PCs, printers, tablets and phones from those sold by rivals."

In a strangely truncated and oddly positioned quote in Businessweek's article, Apotheker indicated that is looking to go much further. "You create a massive platform," he said. Elsewhere in the piece, Apotheker said that HP had "lost its soul" and that he'll use acquisitions to expand in the software market.

On the surface, considering they come from the world's number-one maker of PCs, these are damning words for Windows. And they come at a time when attention and excitement is absorbed by mobile- and web-oriented platforms that have open code bases, particularly Google's Android.

Businessweek reckons that Apotheker also wants to revive the tradition of homegrown invention inside HP. The company has decided it can't innovate to the extent required using Microsoft's operating system.

HP is moving into tablets and phones against Apple's hyped iPad and iPhone, and maybe it's this that brought about HP's epiphany. The HP Slate 500 that was previewed by Microsoft chief executive Steve Ballmer in January 2010 took at least nine months to arrive, and when it did arrive, it did so on a wave of indifference - reviewed by PC World as a colored-up Kindle.

Meanwhile, Gartner has slashed its estimates for PC sales in 2011, blaming a slump in sales of netbooks as consumers pick tablets as their second computer instead.

Is HP doing what Microsoft did to Intel recently, going its own way? And - if so - what does all this mean for Microsoft's OEM business relationship with HP? Microsoft was once the other pillar in the Wintel alliance that dominated computing in the 1980s and 1990s, but in January, Redmond said it was putting the forthcoming Windows 8 on ARM, ending decades of fidelity with Chipzilla.

Putting webOS on HP PCs certainly puts the Linux-based operating system in front of a lot of ordinary people. HP shipped 17.7 million PCs during the most recently recorded quarter, according to Gartner, cementing HP's position as the world's top PC seller. There's an argument that people could discover and try webOS, decide they like it, and move off Windows over time. But two things indicate that while things are changing, this is not the death of HP's alliance with Microsoft.

For one, HP will make webOS available as a second option on its PC. If HP realty wanted to kill its PC business, then it could do no better than removing an operating system that most business and consumer applications are written for and most users are familiar with using.

HP knows this and taking the two-operating-systems approach is not new to Apotheker. HP made Linux available as an option on Windows machines like the Envy and ProBook last fall, before Apotheker arrived. Interestingly, HP claims it was the first to ever offer Linux on a notebook - SuSE Linux on the Compaq NX5000 handsomely priced at $1,140 in August 2004.

Next page: Is it safe? Is it safe?
Page:
Tips and corrections
26 Comments