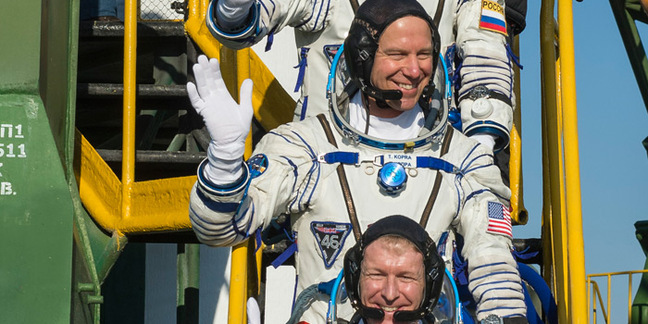 One-time Russian secret agent Anna Chapman, globally famous for being the one of the deep-cover spy ring unmasked by the US last year, will now assist the Russian space agency in designing a stylish new uniform for its personnel.

Evidently this won't do for space troops.

The revelations come from top Russian cosmonaut Sergei Krikalev, who has six space missions to his credit: two long-duration stays on the Mir space station, two missions as a crew member aboard US space shuttles, and two further Soyuz trips to the International Space Station – including a stint as station commander. Krikalev has logged more than two years in space and is nowadays chief cosmonaut at Russia's Gagarin centre.

"Chapman told me that she intends to participate in designing clothing for the Khrunichev [Space] Center; in what capacity, designer or financially, she did not specify," Krikalev tells Russian state newswire RIA Novosti. "As for me, I said we're going to do something similar for the [Gagarin] Astronauts Training Center, and Anna Chapman immediately expressed her desire to participate," he continued, adding that further details have not yet been discussed.

Chapman was busted for espionage last year by the FBI along with nine others: all the detainees later admitted being part of a deep-cover spy ring set up by the SVR, Russia's foreign intelligence service descended from the overseas apparatus of the Cold War KGB. The members of the ring were later released to the Russians in an exchange of prisoners at Vienna airport, which saw four US agents released.

It appears that Chapman and her fellow spies found out little information of any importance during their time in the USA, and their methods of communication with their Russian handlers were embarrassingly amateurish: making them easy prey for US counterintelligence operatives. Nonetheless, the group were subsequently decorated for their efforts by the Kremlin and hardline Russian president Vladimir Putin reportedly joined them for a patriotic sing-song.

Chapman has since embarked on a variety of enterprises designed to capitalise on her high profile, including sexy photoshoots for men's mags and, according to RIA Novosti, "an apparent attempt to launch a political career". She has also appeared at space launches in Russia.

Chapman's various enterprises also include the customary fashion label, and it now appears that this effort may extend into creative work on new uniforms for ground – and perhaps even flight – personnel in Russia's space organisations.

No doubt many will look forward keenly to seeing Chapman modelling a new line of figure-hugging flameproof overalls or similar in due course. ®