Microsoft offers a very standard model here that does little to impress. Despite being a full keyboard, the Desktop 800 is limited to just five hotkeys. These run on from the F keys, which along with the ESC button, are set lower into the body. The Desktop 800 is another keyboard with a black gloss finish covering most of the product apart from the keys. Again, it's destined to attract finger marks - it is a keyboard after all. Still, things could be worse, as it doesn't irritate too much while tapping away on it.

Yet, despite having a good shape, these keys feel tacky and cheap and heavy-handed typers are likely to make a fair amount of noise on them. There is a battery indicator too and while it's not as cheaply made as the Logik, if your looking for anything other than bog standard, shop elsewhere. It is only £30 though and comes with a very basic mouse.

Have a look on-line for a Mini Bluetooth keyboard and you'll generate dozens of results, all very similar looking with samey features. This particular model sent over from Expansys is one of those clones. It's roughly the same size as an iPhone and is perfect for such use, as well as tablets and TVs. Each key doubles up with secondary features and there's even 11 with specific commands for mobile use.

Held like a phone or gaming pad, you end up typing with your thumbs, which can be quite a clumsy affair with fat digits. I often mistyped words by hitting other keys accidentally in the process of typing too quick. It's a nifty little device though that serves its purpose and has separate LEDs for connection and power status, as well as a built-in rechargeable battery, that gets powered from a USB port. 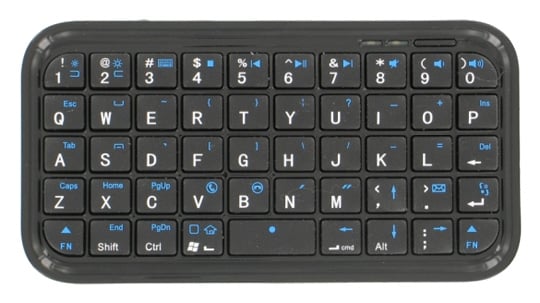